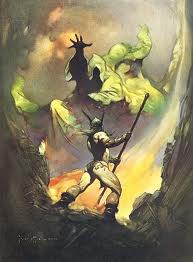 The clear division between divine and arcane magic of Pathfinder is practically non-existent in Sword & Sorcery. In fact, it can be argued that such distinction is more proper of Christian medieval legends. Famous sorcerer and witches of myth were usually wise men and women, already instructed in their occult and mystical crafts before any pact or covenant with the gods.
That said, I think the easiest way to incorporate a “S&S ethos” to Pathfinder is simply to remove divine spellcasters. If you don’t mind some extra work, you could try to adapt the Arcana Evolved

magic system to Pathfinder. In this excellent variant of the d20 system, there’s no distinction between different kinds of magic (a very cool example is the mind witch class). Arcana Evolved even has a magister class that’s the mystical equivalent of the fighter – a character that is equally adept with all kinds of spells. Of course, you could also buy Conan d20

, but the idea here is to use Pathfinder.
Ok, here’s my “dirty and cheap” way of using priests and cultist in a Pathfinder S&S campaign with mechanical benefits (after all, you can always just use the arcane spellcasters as it is, with all religions been just cults controlled by lay members or arcanists).
First of all, remove all divine spellcaster classes. Clerics really have very little in common with S&S, the same goes for Paladins (if you really need a “divine empowered” champion, steal this excellent class here). Rangers can be kept if you use the Spell-less Ranger of Kobold Quarterly #11 – but I find that unnecessarily, as Barbarians and Rogues are more than capable for the role. Druids are an interesting case, for they surely meet some of the archetypes of S&S – the classic shaman or forest witch –; just define that their magic is arcane. Maybe Druids are the primordial spellcasters of the setting, when magic was learned directly from spirits and feral ancient beings of the jungles. Druid magic is unrefined and bestial, with lots of blood and sacrifices at moonlit menhirs (never forget the menhirs!). I also would keep Oracles, as a natural “evolution” of the Druid (but beware, I only do this because I’m a total fanboy of this class). Oracles are also arcane spellcasters in a S&S setting. Their magic traditional was the result of mankind contacting “higher” orders of outsiders and creating the first organized temples and cults. Maybe they’re the real servants of the strange and alien Outer Gods of the setting. So, Oracle magic is still frightening and inhuman – that’s way they’re cursed –, just a step above druid barbarism. Actually, I would establish that the first wizards were ambitious and unscrupulous men that literally stole the knowledge from the Things of Outside and their Oracles. In the old and decadent desert metropolis ruled still by these Oracles all sorcerers and wizards are hunted and sacrificed (in an arena full of nasty beasts of course). Finally, we’re left with the Inquisitor class. While clearly based on a Christian archetype, I believe that the Inquisitor could be adapted to a S&S setting. It has the right mood. As with the other cases, just rename their magic to arcane.
Before going to the next step in adapting Pathfinder to a S&S style, I just want to let clear that the classic distinction of arcane/divine magic is, in the end, purely a matter of flavor. Renaming a type of magic to arcane doesn’t really change anything else. Even if the old conundrum of “arcane casting and armor” bothers you, remember that classes like the Bard already bypass some of these limitations. Therefore, nothing can stop the Gamemaster from renaming the Inquisitor (or Druid) an “arcane caster” and specifying that they can cast these spells only with the armor proficiencies granted initially by their class.
A more serious consequence is that, because the Druid, Oracle and Inquisitor don’t follow a divine patron they couldn’t anymore have their powers revoked if a particular ethos was broke. That isn’t true. Remember, in this implied setting these classes represent an older restrict style of spellcasting. They still have "ethos", but of ritual nature (instead of a moral one). Think about them more like taboos. The old wu jen class of AD&D (or even the 3rd Edition version) is a great source for those. Try to create taboos with strange, unsettling or weird requirements – maybe a Druid can’t sleep under an artificial roof or eat cooked food; while a particular Inquisitor can’t talk to members of the opposite sex; and that Oracle must eat the little finger of all human enemies defeated. Be creative and use the taboos to strengthen the genre’s themes. Think of these taboos not as divine obligation but as crude spell requirements of old arcane traditions. Remember that that’s why these guys hate wizards, sorcerers and other “charlatans” – they got it easy.
Let’s proceed.
Second part: all spellcasters have the option of adopting a “divine” patron. This is represented by a new feat called Adept, that grants access to a Cleric’s Domain. These extra powers and spells are the result of the spellcaster been initiated into a cult or religion of the setting. Note that these sects don’t follow a true deity. Maybe they’re servants to an outsider or a chthonic monstrosity.
To counterbalance this extra boost of power to spellcasters I added a special type of “divine retribution” effect. If the Adept spellcaster break his patron’s ethos, he automatically suffer a bestow curse effect without any saving throw (chosen by the Gamemaster and proportionally to the ethos’ violation). The only way to remove this curse is by atonement before this patron. Another option is to join another “religion”, by been formally accepted by the new cult’s “god” (the Gamemaster may allow the use of powerful spells like wish or maybe an artifact or unique creature to remove the curse).
Again, it’s important to remember that this patron’s ethos shouldn’t be of a moral nature. Don’t bother with the good/evil axis. We’re talking about Sword & Sorcery after all! Deities are, at best, distant and amoral forces. Usually they’re petty and wicked beings, with strange agendas and disturbing desires. If you really want to S&S-style, forget about ethos – make the god’s presence a constant thing. The Adept receive always disturbing dreams and signals from its patron, urging him to get an artifact, old spell or person; or to kill some rival spellcaster and take control of its temple. Treat the Adept’s “god” really as an unfathomable and demanding master.
I’ll post the new feat and some extra bits regarding S&S games in my next post.

Posted by Tzimiscedracul at 9:03 AM