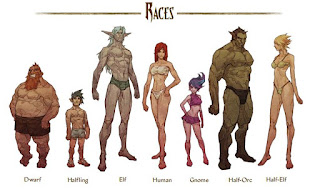 I. Humans were created by a dead god, later betrayed and killed by them to gain the boon of magic. This forgotten deity had a brother, who swore a terrible oath, to live in darkness and fire, until all the betrayers were plunged in eternal damnation. The name of the brother? Asmodeus.

II. Humans came from the first dwarves who reached the surface eons ago. Some human royal bloodlines are still "pure" enough that their scions are long-lived and can use dwarven magic items.

III. The first dwarves were forged and molded by the gods of the depths. And that is still the law. All dwarves are formed directly from clay, stone or crystal by their priests. This secret is a holy mystery hidden from the other races, though dwarves know that one human empire stole this secret eons ago – until the dwarves fell that forgotten realm [Yes, I'm totally stealing this from Dwimmermount].

IV. Dwarves are actually half-breeds. They're descendant form exiles, criminals and slaves who fled their overlords and reached the Brightlands (the surface). To survive under the blazing light and cold weather the dwarves united with the most populous surface race – humans. True Dwarves never left the depths and are still proud, stern and strong. They call themselves Duergar (“True Folk”) and they won't suffer their mongrel cousins of the Brightlands.

V. What most people call elves are actually half-elf/half-human. True Elves are an outsider race of chaotic, care-free and amoral fey who accepted a pact with the gods to banish a common foe of old (demons, titans, pre-humanoid deities... the legends aren't clear). Half-elves are just humans with even less elven blood.

VI. Elves are actually a dream given flesh. That's why they can't sleep and must trance to rest. Some believe that the first elves were taken from the bright dreams of mankind (the first human tribes, who believed in the fair gods of the woods, glades and lakes); others think that they're taken from a god's last dream. Elves believe that their spirits dissolve into nothingness when they die, unless they can touch a human, halfling or dwarf's life (with wonder, love or dread) so that they can keep living in their dreams.

VII. Half-elves aren't a true race. Also called Elvenmarked, Elf-friends or Startouched, they're a special (and magic) status, bestowed upon those blessed by the elven kings (or deities) for great services and perilous quests. Most "half-elves" are humans only because they're everywhere at the present age.

VIII. Gnomes are actually half-elf/half-dwarves. This is a secret very dear to them. The little ones fear that if the truth ever comes out, both dwarves and elves will declare war upon them (and upon each other) to clean "the Shame". Gnomes can use items made especially for elves and for dwarves (and they're also affected by effects that hurt elves or dwarves).

IX. Gnomes aren't a true race and must kidnap children of other races to create new gnomes.

X. Orcs are actually elves cursed when the world was young. If an orc drinks elven blood, he gains all Elf traits for the next 7 days. If an orc drains an elf's spirit (through a secret 5th level necromancy spell), they remove part of the divine curse, becoming the dreaded dark elves. Orcs are also as long-lived as elves; unfortunately, their society is so violent that rare is the orc who lives more than 50 winters. It’s still unclear if half-orcs can gain such benefits.

XI. Half-orcs are actually created through sorcery, as orcs can’t crossbreed with other races. The problem is that all half-orcs are vulnerable (-4 on saves) against commands and mind effects from their sorcerer overlords.

XII. Few people know but all Halflings know how to speak Abyssal. It has something to do with halflings myths and their origins (curiously must legends don’t mention who created halflings, only that they’re always “around” humans). All halflings deeply fear demons [This idea came – if I’m not mistaken – from a error in the early open playtests of Pathfinder where it typed that all Halflings knew Abyssal].

If you have any other (crazy) ideas, please share it.

Posted by Tzimiscedracul at 10:48 AM