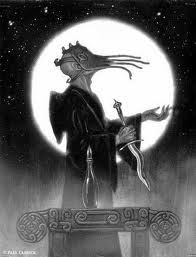 As promised here is the new feat that enables Sword & Sorcery spellcasters (as discussed in the previous post) to make pacts with gods and Strange Things from the Outer Dark.
Adept
You become servant to a spirit or outsider patron in exchange of a portion of its power.
Prerequisites: Caster level 1+, Knowledge (Arcana, Dungeoneering, Nature, Planes or Religion) 3 ranks.
Benefit: By establishing a pact with a supernatural patron (an aberration, dragon, elemental, fey, outsider, spirit, undead etc.) you gain access to a Cleric Domain. Usually you’re free to choose, but the Gamemaster can restrict the available Domains to better reflect your patron’s origins and powers.
You can use the Domain treating you Caster Level as your Cleric level. You gain one extra slot for each spell level that can only be used to prepare the respective Domain spell. You can spontaneously convert any other prepared spell (or spell per day slot) to cast any Domain spell of equal or lower level.
If you break any of your patron’s commands or taboos, you automatically suffer a bestow curse effect (without any saving throw) chosen by the Gamemaster (who can choose any other suitable effect, like summon an angry demon against you).
The Gamemaster and you should work together to define other aspects of your pact. Maybe your spellcaster character sold his soul to obtain this feat or his presence and location can always be felt by his patron.
Options, options, options…
The Adept feat presupposes a lot of what was discussed previously. In case you don’t agree with that approach or desire a simpler option for S&S games, here are other ideas.
Lite Pact Magic
Traditionally S&S magic is a lot more dark and dangerous (or at least unpredictable) than the Pathfinder magic system. Well, the “chaos factor” is hard to change without significant alteration to the Core Rulebook rules. The easiest way that comes to my mind is the old Psionic Handbook

’s Power DC system (of D&D 3rd). Instead of a fixed Spell DC, each time you cast a spell roll 1d20 plus the respective Ability Score modifier plus the spell level. Note that you’ll get a lot of randomness with this. You can also establish that a ‘natural 1’ is a magic fumble (use your evil imagination) and that a ‘natural 20’ grants a boon – maybe the spell isn’t lost, maybe it is cast at a higher level or has some extra effects. These special results depend heavily on the GM’s call and shouldn’t be used otherwise. Even if you want a “Chaos Effect Tables” it’s easy for the players to know what to expect and I think that nothing is more chaotic or frightening than the GM’s liberty to have some fun with your spellcaster’s failures. 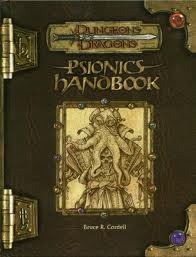 The “dark and dangerous” aspect is easier to do. A very simple pact magic system can be done on a slot-based mechanic. All spellcasters have the option of conducting a ritual (maybe glimpsed from old tomes or forgotten temple scriptures) to contact an outsider/spirit and gain some extra power by agreeing to some small service, servitude or pact. This ritual is concluded with the choosing of a specific spell slot. The base effect is that the spellcaster gain from the supernatural patron an extra slot of the same level. For example: if a necromancer summon a demonic shade and used a 3rd-level slot, he gains another slot of that level. Maybe this extra slot can only be used to cast a specific spell (from the patron), maybe it grants the use of a spell-like ability possessed by the spirit once per day.
This pact requires a small service of the spellcaster, something that involves a moderate effort (like killing a type of creature with the granted spell or maybe a few points of ability damage). A more powerful boon, like additional slots or a greater spell or spell-like ability could require greater endeavors (for example: 101 nights and days of servitude, killing 13 princes, summoning and releasing outsiders in 7 different cities etc.).
If the spellcaster fails to keep his part of the bargain he could suffer an effect equivalent to the boon granted – maybe just 1d6/spell level that can’t be healed with magic; an instant summon monster effect of the same level that instantly attacks the caster; a curse; an infernal mark in his forehead, etc.
This lite “system” is loose and customizable enough, I believe, to be easily incorporated into any Pathfinder game. The Gamemaster can control the player characters’ options by limiting these pacts to old rituals found in specific places (or maybe the players must research the name of the outsider to be summoned).
Darkness and Madness a la Carte
Of course, this been the d20 System, is more easy simply to take other mini-systems and introduce them in Pathfinder. Some succinct suggestions:
>  Add Incantations rules from Unearthed Arcana

(or directly from here) to your Pathfinder game. You can even remove spellcasters classes from the player’s options, using them only as NPCs. 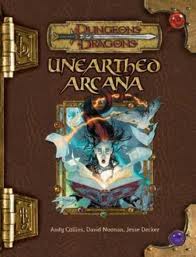 magic system! It’s very easy to adopt and use very lite rules. The option of removing spellcasting classes is even better with this ritual magic system. Don’t forget the sanity rules. 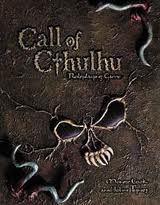 >  All magic is dark and tainted. Steal the thaumaturge class’ rules for taint and spell recovery from Green Ronin’s masterpiece The Book of Fiends

and apply it to all spellcasting classes. The Heroes of Horror

for D&D 3.5 also have taint rules, but I prefer the first option. 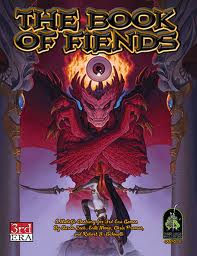 >  Still in the Green Ronin’s turf, use the magic system found in the True Sorcery

supplement. Albeit complex and demanding more experience from both players and Gamemaster, this system was created to simulate the Black Company novels mythos and easily fits S&S style of magic. 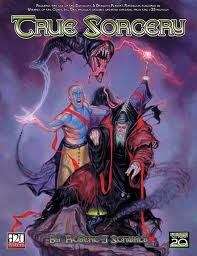 >  Steal the old AD&D 2nd Edition rules for “historic settings” by increasing all casting times (1 action becomes 1 or 10 minutes, for example), thus turning all spells effectively into rituals.
>  Another option is to remove spellcaster classes and make spellcasting a feat chain ability. Each feat enables access to one spell level of one class (usually the wizard or cleric spell list). Maybe these feats requires ranks in Knowledge (Arcana or Religion) or Spellcraft. Actually, you could merge this system with the last option: use ritual magic and no-spellcaster classes to obtain a “Lankhamarian” feel in your games (and if you really want a Grey Mouser character, use the rogue class but let the player choose between a Spellcasting feat or increasing his Sneak Attack).

Posted by Tzimiscedracul at 5:21 AM