The Yaksha and Race Design (for Pathfinder)

Looking back now I believe that one of the problems (but not the only one) with Crônicas da Sétima Lua was the lack of playtesting. I myself never participated in a playtest until recently with Newt’s awesome Crypts &Things (more about it soon).
The thing with playtesting here in Brazil is that I never saw one that worked. Measures like NDA don’t work with most brazilian players – Internet’s anonymity is just too much tempting. Together with this, we have the fact that brazilian RPG “industry” is microscopic, unprofessional and factious – most authors know each other and about half of them are always squabbling with the other half. They don’t trust people outside their inner circles of friends (or worshippers, if you catch my meaning) so playtests rarely are effective or objective.
But – as usual – I’m digressing. This post is about one particular and interesting consequence of Chronicles of the 7th Moon lack of playtesting: Yaksha (singular and plural).
Yaksha are a new race, made especially for the campaign setting of Isaldar (the 7th Moon). With their name taken from Indian mythology, Yaksha were created to fit the iconic role of the Cleric.
When the Primordial World was destroyed by the Annihilation, the gods saved most of the mortal races by teleporting them to Isaldar – among these they Yaksha and their cities were the first to be saved. They’re a race of ascetics (creators of arts of the monk), sages and traditionalists. Like mythic India, their culture is old and filled with complex and sacred customs. In fact, Yaksha see most mundane and natural events as manifestations of the divine. Yaksha are also proud, cold and tend to be condescending with the “Younger Races”.
Although I never mentioned it, I created Yaksha to fit a concept that’s very common in my gaming experience: the arrogant (and even slightly racist) Elder Race. Many of my (previous and present) players read Lord of the Rings and Dragonlance – especially the later. Because of this, they have a (annoying) habit of roleplaying elves as Lawful, disdainful and racist bastards. While some of these traits may have originated from one or two High Elves of Middle-Earth; the real culprits are Dragonlance’s Silvanesti and Qualinesti. Anyway, D&D’s original and “basic” elves were Chaotic and carefree creatures, which a very different background – in my opinion the best example of a “D&D elf” is Deedlit, a character from the classic anime Records of Lodoss War. 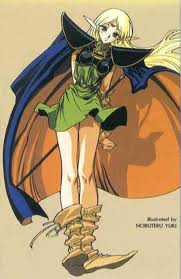 So, in order to satisfy those players above, I attempted to create an elder civilization of beautiful and proud humanoids, favorite of the gods, masters of divine magic and martial arts (and also psionics) – almost a mix of a Melnibonean with a Jedi. As a concept, it seemed fine to me.
In reality it was a lot different.
Basically, in the 4 or 5 years since Chronicles of the 7th Moon was launched (for D&D 3.5), I never saw one player using a Yaksha. In my own group only one player attempted to play with them, but he eventually abandoned the character. I believe that, if we had made a serious and objective playtest this “bug” would have been detected and – I hope – corrected.
Bonus Content: The Failed Race itself 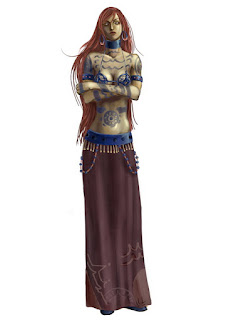 And here are the Yaksha for your perusal. I took the liberty of updating their stats for Pathfinder, but the flavor is the same, while the mechanic was barely touched.
Yaksha 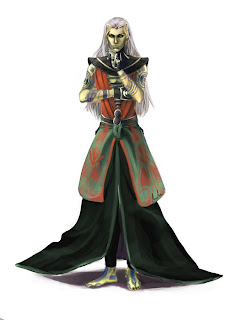 P.S.: I will not be posting game sessions' reports anymore. In part because I don’t have time anymore, spending most of my leisure hours helping my wife with our hobbit-girl here at home. Another reason is that game sessions’ report were never a “hit” in the blog. However, my Chronicles of the 7th Moon campaign is still going strong, after 4 years I believe, and we just ended our 54th session last week – quite a feat for a group that lives some 300 miles apart.

Posted by Tzimiscedracul at 4:00 AM 0 comments

I’m just back from a short vacation with my family. While I’m preparing a post on my first official (and failed) attempt on race design, he’s the newest review on one of Open Design’s newest product: Your Whispering Homunculus. 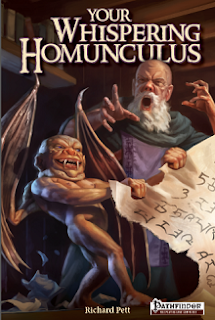 Your Whispering Homunculus (YWH) is Kobold Quarterly’s blog most famous series (probably losing only to the Quarterly itself and the Patronage Projects’ news).
Each YWH post is, basically, a small, very specific piece of (delightful, bizarre or humorous but always useful) game material – things like tables for strange tavern recipes, odd villagers, weird weather, local rumors (and superstitions), monsters with tainted blood (or made “unique” by past scars and wounds).
Like forewarned by the author itself (Richard Pett) YWH is “(…) the roleplaying equivalent of spice added to meat to bring out a particular flavor (…)”. It’s the kind of stuff that while nonessential, it’s always flavorful (no pun intended) to enliven the game night when you less expected.
The product YWH brings amazing 34 articles (in 166 pages) of game material. The inner layout is clean and simple, with the B&W interior art being practically non-existent (which make sense for a product of this type). While designed to be used in Pathfinder, YWH is easily converted to D&D 3rd and other d20 variants (in fact, most of its columns are system-neutral).
You have columns like “20 Daft Bets and Dares” (with ingenuous and fun contests that challenge even high-level PCs),  “50 Strange Entertainments”, “20 Holydays” (one of my favorites!), “One Hundred Curious Emporiums”, “One Hundred Pointless Objects” (for those famous empty dungeon rooms), “It Came from the… Toilet?” (yours PCs never will trust a privy anymore), and “A Plethora of D12 Tables”.
As you can see, YWH has a definitely Old School feel to it and is composed mostly of random tables (it reminds me of products like the all-time classic AD&D 1st Dungeon Master Guide and the recent Pathfinder Gamemastery Guide – for which the YWH’s authors was one of the contributors).
Some of YWH’s articles are more rules-heavy, but always with a twist to the macabre and the whimsical. Columns like “20 Malfunctioning or Disappointing Magics” and “Malignant Magic” are full of excellent ideas and point unwaveringly to Richard Pett’s blatant Evil alignment. The various “Undiscovered Bestiaries” are also a good selection of variants for your usual dungeon monster.
Another type of column that is an excellent resource on how to customize even the most ordinary encounters are the “For One Night Only” ones. However, it bears mentioning Pett’s advice on using most of YWH’s tables sparingly – otherwise you run the risk of overloading your players with bizarre and strange happenings, thus lessening their impact.
YWH has a great production value and is an enjoyable reading even if your never manage to use it in your games (shame on you!). The tone of the book – narrated through a dialogue between a  grotesque and hilarious homunculus and it’s evil master – is perfect (and we’re are eventually given stats for the duo). Its dark humor recalls the style of Warhammer FRP 1st, while its more delirious weirdness are totally in line with books like the first Fiend Folio – the fact that Richard Pett is from the UK is thus not a coincidence.
I highly recommend YWH for any d20 fantasy Gamemaster. Because most of its columns still can be found at the Kobold Quarterly site, you may prefer the “Print + PDF” version.

Posted by Tzimiscedracul at 8:48 AM 0 comments