If you still don’t  know Daddy Grognard do yourself a favor and check it out. This excellent Old School blog has one of my favorite  series of posts of all time. In “An Adventure for Every Monster” we have a short adventure, encounter or plot idea for every critter in the original Monster Manual. Each entry is pure joy and a great set piece (to borrow a term from Paizo’s Adventure Path) ready to be used in your campaigns.
What I intent to do here is a little homage to Daddy Grognard (and also because I love to write stuff) by creating one encounter for each monster in the recently released Pathfinder Bestiary 2

. I’ll strive to keep them as short and generic as possible. I apologize early for the lack of any maps, but I don’t use battle grids (and my drawings are awful).
Hope this works. Here we go…
Hell’s Vultures (Encounter CR 5 or 7)
This encounters revolves around a magic tapestry, that can be found among any treasure or maybe affixed to a forgotten or haunted ruin’s wall. The tapestry is richly woven from what appears to be gold, adorned with rubies and violet garnets. It must be worth a small fortune, although it depicts a disturbing and grotesquely detailed scene where deformed and naked humanoids are devoured by monstrous wingless birds against a hellish background of forlorn deserts. At the tapestry’s borders is written “Hell’s Vultures” in an archaic form of the Common tongue, with strange runes at the four corners of the art piece. These symbols are actually in Infernal and represent the syllables “arch”, “ai”, “er” and “ai” repeated nine times.
The picture depicts one (or two) archaierai. It radiates a moderate aura of magic. In fact, it feeds on ambient magic to repair and sustain itself, albeit if detect magic or any other dweomer is cast over it the drapery absorbs the energy and the infernal birds are released over the party. After devouring any intruders, the outsiders return to the wall-hanging.
A Knowledge (Arcana) check against DC 25 reveals the tapestry’s proprieties. A rogue (or any other character with trapfinding) can attempt to disable the magic trap with a Disable Device check (DC 30).
After facing its denizens, the tapestry is still a remarkable work of (infernal) art and its value equals the standard treasure of a CR 5 (or CR 7). 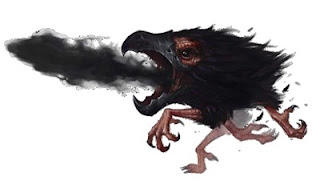 Posted by Tzimiscedracul at 6:33 AM