There are rumors of an ancestral brook in the heart of the forest. It's moss covered waters are said to be fey-touched and to grant eternal youth to any adventurer brave enough to reach it. As usual with these tales, these pathfinders normally don’t come back. The peoples and spirits of the woods tell of a dangerous fey lord or primordial god from the distant past that guards the brook. Druids venerate it, but never approach the holy place, speaking of a terrible nameless form “made of stromclouds and deadly visions”. The local fey are greatly afraid of it, believing it to be an exiled power from the First World*.

Actually, the creature of the brook is a potent aeon dedicated to time and space – a bythos. It was draw to the deep spring a long time ago by a small rift connecting that location to a yet older forest in the First World. Due to that realm’s strange proprieties in relating to time and space, whoever who drinks from the magical spring will rejuvenate to his young form (but will not be granted “eternal youth”, blame the rumors on the local fey).

The bythos see the rejuvenating effects of the water as an indirect “cheat” through the ways of time. Incapable of destroying it, the aeon has taken residence in the brook. With the passing years and the dead of curious adventurers (it doesn’t stop fey and outsiders from drinking from the spring), this champion of neutrality has accumulated quite a trove of magic items. Among these a ring of greater invisibility (see below).

The bythos recently formulated a new strategy to discourage new explorers. Using the magical ring and it's envisaging ability, it allows at first adventurers to reach the spring. When they get close to the water, the bythos send visions of decrepitude and death to the trespasser. If the mortal still persists, the aeon will approach him invisibly. When the victim touch the waters, the aeon will lightly tap him (Perception DC 25 to feel) and use its aging attack on the target. The bythos wants to induce his victims to believe that the “fey pool” actually curses whoever who drinks from it with old age. This in turn will stop future trespassers from discovering the First World rift. 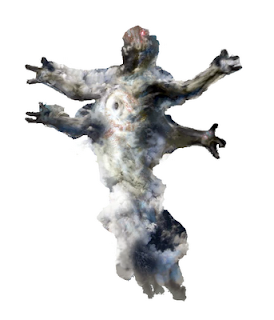 Posted by Tzimiscedracul at 2:44 PM