No, this blog isn’t dead (but my free time surely is). Anyway, I’ve (finally!) managed to finish the wonderful Malazan Book of the Fallen decalogy just a few months ago. And yes, this fantasy series is amazing! (it also demands a lot of time, curiosity and patience). Erikson blended High Fantasy and Sword & Sorcery tropes in a unique way with various and interesting twists – like the amazing time scales, the anthropological approach and the total disregard for heroic/villainous convections…

…Actually, one can argue that Erikson both succeeds and fails dramatically (no pun intended) at the series’ climax. Generally, through the various novels, it’s hard to say that a certain character is evil or good. From the cruelest deities (like Soliel) to the most moral-driven characters (like Mappo), Erikson pulls amazing and unexpected perspectives (and let’s not even get into more complex things like Sandalath, Draconus etc.). In other words, I was a little disappointed with the Forkrul Assail at the end. While Erikson does gives us a good insight at their alien mindset in Reaper’s Gale, the Assails as shown in the 10th book are mostly your usual racist villainous bastards (even with monologues and doomsday-weapon schemes). I was expecting a little more (yeah, I’m spoiled… blame Erikson). However, you have to congratulate the man for the awesome and unique twist surrounding the Crippled God plot. After that, I’m must say that I couldn’t care less about the Assails’ characterization. What Erikson did was incredible. Think about it – it was like reading Lord of the Rings and learning, at the end, that Sauron was actually the victim and that the Fellowship’s mission was to redeem/save him! Oh, my campaigns will become really crazy now


I still intent to post stuff on this tower, however, due to my latest schedule I’ll probably post just once or (hopefully) twice per month. Although my blogging has been failing me, my games are still going strong, thanks Crom! (…and I must confess that between keeping a blog and gaming I much prefer the later, sorry). Our Curse of the Crimson Throne is reading to its long awaited end (we’re hopefully finishing Skeletons of Scarwall this weekend) and tomorrow I’m running my second Dungeon Crawl Classics RPG (via Google Hangout). If things keep going this good, I’m hoping to play a little Numenera and to run a short FATE-powered Pacific Rim game in October.


“How to describe such a demonic entity? When upright, it would have balanced on two hugely muscled hind legs, reminiscent to that of a shaba, the flightless bird found on the isles of the Draconean Archipelago, yet in comparison much larger here. The hip level of the fiend, when standing, would have been at a man’s eye level. Long-tailed, the weight of the fiend’s torso evenly balanced by its hips, thrusting the long neck and head far forward, the spine made horizontal. Two long forelimbs, thickly bound in muscle and hardened scales providing natural armour, ended, not in grasping talons or hands, but enormous swords, iron-bladed, that seemed fused, metal to bone, with the wrists. The head was snouted, like that of a crocodile, such as those found in the mud of the southern shoreline of the Bluerose Sea, yet again, here much larger. Desiccation had peeled the lips back to reveal jagged rows of fangs, each one dagger-long. The eyes, clouded with approaching death, were nonetheless uncanny and alien to our senses. The Atri-Preda, bold as ever, strode forward to deliver the fiend from its suffering, with a sword thrust into the soft tissue of its throat. With this fatal wound, the fiend loosed a death cry that struck us with pain, for the sound it voiced was beyond our range of hearing, yet it burst in our skulls with such ferocity that blood was driven from our nostrils, eyes and ears". 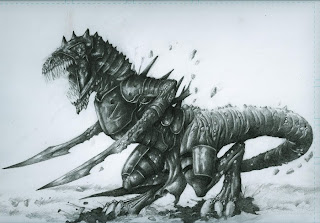 SPECIAL ABILITIES
Sweat Magic: K’Chain Che’Malle dominates one of the oldest forms of dweomercraft – sweat magic. Through this esoteric pheromonic control, K’ell Hunters can accomplish the following supernal feats.
Pheromonic Telepathy (Su): K’Chain Che’Malle can communicate telepathically. Establishing the bond requires close proximity, but once linked the K’Chain can keep communication if within 100 miles of each other (stronger K’Chain can keep this rapport even through greater distances). K’Chain can extend this bond to other willing living creates, but this is extremely rare. A K’ell Hunter can use a standard action to share telepathically any of his senses.
Battle Senses (Su): while within 30 ft. of each other, no bonded K’ell Hunter can be flanked or be surprised unless all other bonded Hunters are also flanked/surprised.
Pheromonic Charms (Sp): the K’ell Hunter can, as full-round action, expand their pheromones to induce strong emotions on all living targets within 30 ft. This simulates the effects of one of the following spells: battle trance, calm emotions, crushing despair, fear, good hope, rage and remove fear. A K’ell Hunter can only keep one pheromonic charm in effect. If beneficial, the pheromone can affect other K’Chain. These spell-like abilities are based on Constitution and have a caster level equal to the K’Chain’s HD.
One Mind (Ex): While bonded with other K’Chain Che’Malle and within 30 ft. of each other, a K’ell Hunter gains a +2 racial bonus to Will saves.
No Scent (Ex): K’Chain Che’Malle can use this old magic to suppress their natural scent.
Predator’s Mark (Ex): K’Chain Che’Malle natural scent induces the panicked condition on all creatures of the animal type.
Camouflage (Ex): K’ell Hunters can change their scale’s color to better blend with their environment. They can use this ability to disappear even in wide plains and deserts. Through arcane methods still unknown to human alchemists, they can also camouflage their adamantine fused-armor. K’ell Hunters can hide in plain sight but they must remain still.
Fused-Armory (Ex): K’ell Hunter are equipped with alchemically and molecular fused adamantine blades and armor. These items are treated both as normal and natural weapons and armors for the purpose of spells and effects. They can’t be disarmed but are susceptible to sunder maneuvers. The adamantine plates don’t inflict armor penalty or reduce their wearers’ astonishing speed.

ECOLOGY
Environment any
Organization triplet or army (50+)
Treasure none

The Dragon’s Firtborn. The alien K’Chain Che’Malle claim to be the oldest civilization on many worlds, born from the primordial crucible of Dragonkind. True Dragons deny such claim, but remain skeptically silent on the matter. Although other Elder Races claim to be oldest, like the Aboleth, they also acknowledge that the K’Chain have reached astonishing levels of dweomercraft and science, specially through the arcane of lore of Kaschan. The few sages that are aware of the Elder Races argue that K’Chain probably came from another world in the Void or even from an alternate material plane.

K’Chain Che’Malle are a caste-based draconian Elder Race whose main civilization fell millennia before the first hominids begin walking over the Material Plane. Their control over the most ancient forms of dweomercraft, alchemly, science and physics are still unsuppressed and enabled the Elder Race to once cover most continents and many planets in large stone and mechanical metropolis. The K’Chain lore – Kaschan – is still erroneously called “sorcery” by the Younger Race. It actually works a lot more like an advance and extremely arcane form of science. K’Chain Che’Malle cities are usually vertical constructs of titanic proportions (built in the form of their dragon gods) and filled with extensive machinery, complex alchemical vats and pipelines, old pheromonic protocols and arcane dimensional principles. The fundamental forces of the planes were easily manipulated by the K’Chain, enabling the constructing of portals, flying citadels, voidships and many others wonders. Their notion of science, however, is closer to the Aboleth’s and the Mi-Go’s view of the cosmos. A primitive younger culture, trying to explain Kaschan, came with this superstition view of one of their greatest feats:


‘Kaschan sorcery is born of sounds our ears cannot hear, formed into words that loosen the bindings that hold all matter together, that hold it to the ground. Sounds that bend and stretch light, as a tidal inflow up a river is drawn apart at the moment of turning. With this sorcery, they fashioned fortresses of stone that rode the sky like clouds. With this sorcery, they turned Darkness in upon itself with a hunger none who came too close could defy, an all devouring hunger that fed first and foremost upon itself.’


The K’Chain are ruled by Matrons, ancient draconic hive queens, with potent mental abilities and unfathomable intellects, who pass their accumulated knowledge and experiences genetically. During the zenith of their rule, the Matrons could create new castes whenever necessary. Ancient texts suggests the following base castes: the machinery-fixing drones, the heavy legions of the Ve’Gath soldiers, the towering J’an Sentinels (the Matron’s bodyguards) and the terrible Shi’Gal Assassins, capable of bringing down dragons (and mortal armies).

K'ell hunters form the K'Chain Che'Malle light infantary and perform scout service to their Matrons and Nests. They look like large bipedal lizards, whose forearms terminate in enormous blades. Their height is twice that of a man. Their lifespan is approximately 1,000 years, although they appear to be able to hibernate for longer periods. A sleeping K’Chain Che’Malle nest is a menace to an entire continent (or world), although the Elder Race is just alien, not necessarily evil.

Like the Aboleth, the K’Chain Che’Malle find the concept of worship and religion strange. However, they somehow venerate or pay intellectual respect to their dragon forebearers. In fact, the last bastions of K’Chain in the world are heavily debating if religion is the reason why the Younger Races are rising. A few (deranged) Matrons are even kidnapping those in touch with divine forces, in order to better “investigate” the matter.

New (weird) kids on the block.

One car say (generalizing a lot) that Tiste Andii are what would happen with Tolkien immortal elves driving mad – as a culture – by ennui. Jaghut (depending on who’s talking) are either the most amazing (and cool) ogre magi reskinning or a twist of Melnibonean’s proportions of the orc archetype. Forkrul Assails are – as already mentioned –Neutral-obsessed genocidal racists ready to be used in any D&D game as villains. However, the K’Chain Che’Malle are really their own things. Erikson outdid himself with these guys. After all, you get a lot of them: original lizardmen or workable “dragonmen” race, caste-based, sweat magic, a hivemind that plays with genetics on a fantasy level, giant vertical Dragon-cities, flying mountains and non-Euclidian (a.k.a. Lovecraftian) magic and technology. How about that?

Posted by Tzimiscedracul at 9:19 AM 0 comments