The Sage (a new class for DCCRPG)


My online campaign of DCCRPG is still going. We’re at the beginning of the Doom of the Savage Kings and the entire party is having a blast playing a bunch of chaotic mercenary and cultists (they always make the villains look good).

Anyway, our new player just survived his Funnel and is starting to pick classes for his 0-level PCs. He created a Warrior and a Thief so far, but when his scribe became 1st level I noticed he wanted something different… not quite a Thief, and definitely not a Wizard. After a bit of chat, I came up with the suggestion of “updating” my OD&D Mastermind class to DCCRPG. Here’s the result: the Sage.

The main inspirations for this class were my Mastermind and – obviously – few pieces of the Sage, from OD&D, AD&D 1st and Dragons at Dawn. The mechanical role of this class is to be a supporter (the player told me however that he didn’t wanted a bard).

This is my first (but I hope not last) homemade class for DCCRPG, and I wrote it in approximately 30 minutes, so it’s either grossly unbalanced or just simply unplayable. We still didn’t have time for a proper playtesting session. As usual, any feedback is really welcome.

Weapon training: A sage is trained in these weapons: crossbow, dagger, short sword, sling, and staff. Sages rarely use armor, as it affects the use of their abilities.

Attack: as a Wizard.

Action Dice: see below. A sage can use his second and third Action Die only for the Sagely Advice ability.

Crit Die/Table: as a Wizard.

Saves: as a Wizard.

Hit points: as a Thief.

Scholar (only Lawful Sages): If a lawful sage fails a lore (see Loremaster) or social check, he always knows exactly where is (or who has) the information that he’s searching. Scholars are respected by Lawful authorities (i.e. civilization) and can always add their level to skill checks while introducing themselves to rulers, requesting rooms at inns and other similar situations.

Erudite (only Neutral Sages): If the neutral sage doesn’t carry a visible weapon or act in a threatening way, he shouldn’t be the target of any monster on the first rounds of combat (unless there a lot of creatures facing the party, as usual the Judge should adjudicate this). If a neutral sage threatens a death curse, he won’t be killed by most intelligent creatures (and if he’s killed he’ll indeed inflict a death curse on his executioner).

Mountebank (only Chaotic Sages): The first time the chaotic sage meets an intelligent creature he can try to quickly trick or lie to him in one round of quick conversation. If the deceit is nothing absurd, the victim must succeed at a Will save (DC 10 + d20 + sages’ Personality and Luck modifiers). A creature, once cheated this way, can’t again be so easily deceived by the character. If a mountebank acquires taint from his patrons (see Supernatural Patron) he can nullify this taint, once per day, during one short encounter (this ability is instantly negated if the sage uses any supernatural power or ability).

Polyglot: A sage always knows how to read and write. He also gains one bonus language per level. He can either choose these languages during the game or spend a few days with a native speaker to learn the new tongue (at the Judge’s discretion).

Loremaster: Sages know a lot of things. They are always treated as trained (i.e. roll a d20) for any skill check dealing with academic or ‘sagely’ lores (religions, folklore, occultism etc.). If the Judge believes that a particular skill check is also related to the sage’s previous professions (for example: a scribe checking for a lost manuscript), the character should roll a d24. All sages also know the following skills (like a Thief of the same alignment): Forge document, Read languages, Handle poison, Cast spell from scroll, wand or rod (yes, this last skill is expanded to include wands and rods).

Curse Die: Progression as a Thief’s Luck Die. First of all, sages recover Luck as thieves. Sages can use Luck to boost their own checks as any other characters. However, sages are experts on curses (especially Neutral sages) and can inflict minor hexes on their foes. A sage can expend his Luck to inflict penalties on adversaries on sight. Each point spent inflicts a Curse Dice on the target (now save). The sage must be able to speak to do so and he can use this knack even during other characters’ or enemies’ actions.

Sagely Advice: A sage can only use his second and third Action Die on other characters, instructing them about what they should do during a combat encounter or skill check. During combat, the sage must be able to speak to the chosen ally, who gains a new action which must use the sage’s Action Dice roll result. A character can only receive one Sagely Advice per round. Out of combat, a sage can also instruct a character about how he should do something. The Judge is the final arbiter about what type of actions can benefit from this ability and the sage must have around one minute of time to instruct his ally.

Supernatural Patrons: Like wizards, sages can invoke supernatural patrons. A sage automatically receives the spells patron bond and invoke patron at 1st level. He can only learn these spells and others granted directly by their patrons. Unlike other spellcasters, a sage can accumulate 1 patron for every three levels (maximum 3 at 9th level). Each patron after the first automatically inflicts taint on the sage and increases his chance to suffer further corruption by one (i.e. a sage with 2 patrons rolls for corruption with a natural 1 or 2). To cast any patron-related spell a sage is treated as wizard of the same caster level.

The Right Tool for The Job: If a sage has enough gold with him, he can declare that he has spent that money before leaving town to buy any reasonably common item that could be carried by either him or a hireling. The sage must explain how the item is with him if he was searched before by enemies.

Planning Ahead: Sages add their level to their Initiative rolls. All characters that go after him must declare their intentions. 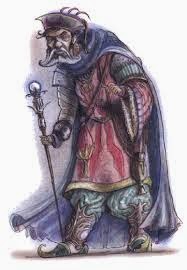 Posted by Tzimiscedracul at 8:27 AM 0 comments

Many people haved pointed that 'A Song of Ice and Fire' (and particularly the 'A Game of Thrones' TV series) is actually a zombie apocalypse disguised as a fantasy. And that's really a cool way of seeing Westeros. If you really think about it, the wights created by the Others/White Walkers are a good example of 'zombies', even thematically. The way they're used in the TV series represents, with perfection, the themes of death and inevitability usually associated with zombies. They also make you wonder about the futility off all the power struggle going on for the Iron Throne - in the end, when 'the Things in the North' come out, who’s sitting on the throne won't make any difference. In other words, Westeros use zombies in an original and cool way (which is a bless in itself in this zombie-overloaded age).

How about stealing that theme for your favorite campaign/setting? Of course, forget zombies. Also forget undeads. Use orcs.

Forget World of Warcraft and other attempts of "sanitizing" orcs. As it happens with all great villains which a long presence in media, orcs were eventually "converted" to a player race (like drows, dragons, demons... even illithids!). Magnanimously ignore this thread. Make yourself a favor and watch again the first minutes of Lord of the Rings - The Fellowship of the Ring. That hungry, bloodthirsty and savage horde plunging directly in the abyss to reach their foes - those are our orcs!

Orcs are the perfect element for a "zombie" campaign. Players believe they known them. After all, they're just a few Hit Dices with weapons. The classical "cannon fodder" for the Big Bad Boss. So, please, start with orcs that are mechanically identical to what your players are used to. But send them in hordes. Really big hordes. You can even let the players unite a few cities (realms?) to make a beautiful and epic final stand - then throw in all your "George R.R. Martin-powered" sadism on them, sit and watch (and make that last epic battle ends in a perfect "Martin-style" twist if you can… by killing any Aragorn-like NPC!).

After showing them that the “Realms of Man” are doomed, see the party's slow realization that the only way out is retreat. Show them that against the Horde, retreat is ever the only option. This isn't a game about defeating orcs. This is a game about what are you capable of doing to survive the orc apocalypse.
But, please, don't just slaughter your PCs. This is a horror campaign, not an exercise in GM sadism. Once you crush any resistance your players came up, start to probe them, to ask questions: "Now that the World of Man/Free Kingdoms/Waterdeep has fallen… what do you do?" That's the official beginning of your campaign. A good source of inspiration here can be Tolkien's works on Hurin and the Silmarillion legendarium, where we get to see entire lands conquered and controlled by orcs.
Now your players have plenty of – I hope – new and unique challenges. If they still decide to flee, they have to find a safe haven (maybe in the far mythical West, beyond the seas... maybe in the Underdark or inside a very far dwarven kingdom... maybe in oriental lands! etc). If they decide to stay they have to learn to live as the underdog (a good change of roles for a fantasy RPG), maybe going out only during the daylight (that if the orc massive volcanic forges or magic-induced volcanism doesn’t cover the skies in darkness)*.
*And talking about darkness, you have a perfect sword & sorcery setting with an orc apocalypse ready to use - Pathfinder's Golarion during the Age of Darkness.

Or maybe you really want to keep the horror element up in this scenario. Maybe now your PCs have to watch the full scale of extinction as the orcs will probably keeping devouring and bleeding entire races before turning against each other and reducing the entire world to bones and ashes. This second path may be more faithful to the "zombie" mythos (especially if you insinuate that things like eating human flesh can grant you unholy powers, eventually turning humans and demihumans into orcs).


Why in the Nines Hells would any sane player want to play that crucible, you ask? Because it’s different and looks really hard (and your fancy players need a lesson). Because you players are curious (or really thought that Midnight and Dark Sun were “easy settings”). Maybe they want to know how the orcs won or from where they came from. Is it possible to vanquish them? These could be good threads for a slightly different “second season” of this horror campaign.

Posted by Tzimiscedracul at 7:11 PM 0 comments