I read more than once that a game designer that doesn’t play games is missing a vital part of his job (and probably a fair share of his inspirations). While I haven’t written professionally in a long time (some 4 years), I believe that that advice holds true even – if not specially – for a game blog author (what I’m now).
Since moving out of my parents’ house, I wasn’t able to form a new game group. My cousin showed some interest in Swords & Wizardry but now it appears unfortunately to have been nothing more than a fleeting pastime. Next week begins the Carnaval. While I was never an enthusiast of this festivity, I’ll take the opportunity to travel back home. I hope to meet again my old group and to continue my Pathfinder campaign. In fact, I discovered that I’m in serious need of it. Wish me luck.
I’ll be back in approximately a week. Until then: good games for you! 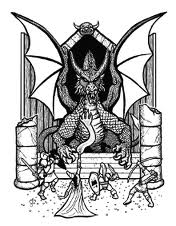 Posted by Tzimiscedracul at 5:18 AM