I finally managed to realize one of my dreams by contributing to this year’s Gongfarmer Almanac. It was an amazing experience and G+ community is made of such welcoming and encouraging people. I was really motivated during the entire work and wish I had more time to help or contribute. 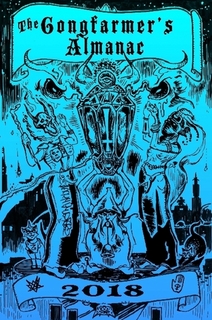 You get the Gongfarmer Almanac here or you order a printed version at Lulu here.

My contributions were slightly revised versions of the Sage, Scout and Berserker classes, an article about Birth Augurs and my first adventure made for a zine - Death Aquatic! In fact, the entire point of this post is feedback about the later. I never wrote an adventure before so I really would like to know what you think of it? Did you liked it? Most importantly: what you didn’t like? My thanks to Keith Garrett, who edited my nightmarish text.

If you liked the adventure, here is some extra stuff for it...

Bonus Material: Sandboxing in the Shores of Flesh

If you really want to run Death Aquatic as a funnel, you can create a small sandbox environment on the Shores of Flesh, before upgrading any survivors to 1st level. Here are a few factions/locations to steer things up.

1) Pirates! Your ship was not the only one devoured by the Leviathan. A crew of mad reavers, guided by the dreaded Green Woman, was also taken. In fact, maybe the Green Woman summoned the Leviathan. She is a cultist of the Great Old Ones (use the witch stats from DCC Core Rulebook) who wants to reach the Leviathan’s brain and thus gain control over the creature, throwing it against civilization. She is served by a crew of some 20 pirates. The Green Woman bears the King’s Black Nail, a relic that allows here to mark the Symbol of Kong over a humanoid male and change him into a berserking man-ape (the Green Woman needs the relic to keep control over them after the transformation). The Green Woman desires information and will try to recruit the party (and have any males marked with the King’s Black Nail). She’s bizarrely fond of dwarves. The crew use bandit stats or jungle ape-man stats when transformed.

2) Deep Ones. A party of deep ones is searching for lost relics of their deity (these are the same relics that can be found by rolling on the DEATH AQUATIC! LOOT TABLE). Bizarrely, these deep ones are not interesting in a fight and just want to get out of the Leviathan (they don’t know how, but believe that the psionic dwarf kraken might know the way out). Their leader still remember his “dry days” as a lowly gongfarmer and might help the party if they get the lost relics for him. However, the deep ones are hungry and that may disturb negotiations.

3) Crusaders! Another “victim” of the Leviathan. These fanatics are stuanch enemies of Chaos. Unfortunately for them, “Chaos” means anything that isn’t like them. Their leader is the Blind Prophet, a mad paladin whose detect “evil” talent is so heightened that he can pinpoint the exact location of chaotic creatures, wizards, elves, dwarves, halflings and such “abominations” within a 100 ft. His crusaders are currently waging a war against the Green Woman’s man-apes and the Kerasoi. The crusaders use the knight stats from the DCC Core Rulebook. The Blind Prophet is too old and feeble and should be harmless when alone (but if killed, please change him to a ghost).

4) A lonely wereshark. This lycanthrope calls itself Teeth and has been trapped for some time in the Shores of Flesh. He knows and deeply fears The Mistress, so he avoids the Kerosi and never leaves the various shipwrecks. All that Teeth wants is some company, so he’ll probably kidnap a PC or two. Unfortunately he’s also a wereshark, so he’ll keep biting any prisoners (just small “inofensive” bites) until they become lycanthropes. Teeth has a considerable treasure hoard hidden. The bugbear stats from the DCC Core Rulebook work nicely for our wereshark, just change ‘mace’ to ‘bite’ in the Attack, add a bleeding effect (1d3 hit point per action taken by the bitten victim is a good start, the bleeding can be healed with clerical magic or a strong bandage) and let our lycanthrope regenerate 4 points per round (unless grappled and prevented from moving).

5) The weird galleon. This ship reached the Leviathan’s mouth intact. Unfortunately the entire crew is dead because the ship has a vampire. The good part is that the vampire can’t cross water and thus is bound to the vessel. There’s some treasure aboard and perhaps some magic stuff. The vampire will try to bargain with wizards or elves to have his coffin transported to the Shores of Flesh. He will, of course, betray the party in the future, but until that the “Hey, we got our on pet vampire!” is a go. Use wrathofzombie’s great vampire rules.

6) The Mermaid Looters. A gang of mermaids wait for ships to be wrecked inside the Leviathan’s mouth, then proceed to pillage any treasure (particularly items made of metal or glass) and finish dying survivors. These mermaids are cowards and won’t attack unless if cornered. They will try to throw a faction against another. The mermaids are bastards but know a lot about the Leviathan and the Tower of the Horn. If the Judge is feeling nice, he can have a mermaid trapped inside a shipwreck. For our cute mermaids use deep ones stats, but give them the harpy’s song ability (both from the DCC Core Rulebook).

7) The Lost Lighthouse. WHAT?! A friggin’ lighthouse? Yes! The party see a slightly tilted lighthouse in the Shores of Flesh. And it’s beacon is lit. And it’s is actually a lighthouse taken from our Earth, during the Roaring Twenties. There is a Cthulhu cultist, quite mad, feeding the beacon with the corpses of Kerosi, survivors and even the own flesh of the Leviathan. He has a revolver, dynamite and a forbidden tome. Nice stay! (The lighthouse can be a safe haven for the party or even a disputed location in the setting)

8) A Stormrider encased in ice! A storm...what? Stormrider! If you don’t know what a Stormrider is please check here then go read the amazing Malazan Book of the Fallen books. This Stormider in particular was wounded in battle before being sucked by the Leviathan. To heal she created a sphere of ice around herself. The party can find this mysterious sphere of glowing ice and see the humanoid shape inside of it. If freed and healed, the stormrider can be summoned once to help. The rider will appear and help the party for 1d4+1 rounds. Don’t mind giving the rider stats… if they party is in trouble due to combat, allow the rider to help them by shaping the waves and hitting enemies (like a water elemental from the DCC Core Rulebook). Remember: Stormriders are alien creatures; they don’t understand, for example, that their innate cold hurt most humanoids (so if the party saves the Stormrider, she’ll probably give “a friendly hug” to her savior, dealing 1d6 points of cold damage in the process without noticing).

A Knight of Eight is a elite warrior from an ancient race of intelligent octopuses “do-gooders” that are actually from another world. They roam the Multiverse fighting the Great Old Ones and their servants, although most Knights of Eight also enjoy battling Chaos. A Knight of Eight can live on land or sea without any problem. They’re very smart but also extremely naive.

Hit Points: A Knight of Eight gains 1d8 hit points at each level.

Weapon training: A Knight of Eight is trained in the use of the crossbow, dagger, flail, handaxe, javelin, lance, net, polearm, shortbow, longsword, sling, spear, staff and trident. They are also proficient with any technological weapon (Judge’s call). A Knight of Eight doesn’t wear armor, except for their big helms that work as chainmail (and many also use one or even more shields).

Action Dice: You’re a fighting octopus with 8 arms! Here is how it works - your first action in the round uses a 1d20, the second action uses a 1d16 and so on, following the die chain. There are two exceptions:
A Knights of Eight can use a shield like any other character. However, he can spend 1 Action Die to use a second shield, improving his AC.

Grapple and Squeeze: Knights of Eight gain a +1 die bonus to grapples (or to avoid grappling), escaping bonds or squeezing through spaces a lot smaller than them.

That is a lot of arms: Knights of Eight always roll a d20 for any action that could benefit from lots of “hands” or arms. This usually includes opening things, climbing or holding on to something (to avoid falling), handling delicate items, locks or mechanics, writing, typing.

Amphibious: Knights of Eight work just fine above or below water.

Telempathy: Knights of Eight can learn to talk humanoid tongues, although their voices are horrible and hard to understand outside of water (many prefer to write their intent on sand or another similar substance… they can write really fast). However, Knights of Eight are telempathic and can transmit emotions, feelings, sensory information and even small flashes of memory (like photos). This usually requires an action and an Intelligence check (DCs between 10 an 20).

Here are a few suggestions of what a Knight of Eight can do with telempathy: sharing what you’re feeling with another creature you can see (this task should cost an action but be automatically successful most of the time); inducing/reducing an emotion, sensory input or feeling on a target you can see; detecting the presence (but not the exact location) of any creature capable of emotions or feelings (won’t work on mindless creatures).

Unwilling targets resist with a Will save. If a Knights of Eight rolls an natural 1 or a target saves with a natural 20, the telempathy ability is shutdown until the Knight can rest. If the Knight of Eight tries anything that seems too powerful or fanciful, the Judge is within his rights to increase that margin of error by +1, +2 or more. For example: if a Knight wants to induce fear in a group of 5 bandits around his party, the Judge can declare that the margin of automatic failure is now 1-5 (or 15-20 in the Will save). Very risky.

Ink Cloud: Knights of Eight won’t admit it but they can produce an ink cloud (on air or water) to blind their enemies (and allies). Every target on a 10 ft. radius must pass on a Reflex save against DC 15 or become blinded for 1d4 rounds (the blinded target can spend an entire round cleaning her eyes). After using this ability the Knights of Eight must roll a 1d4 Usage Die (if a 1-2 shows up, downgrade the die to 1d3 and then to 0). Food and an entire night of rest restores the Usage Die.

Battle Cornucopia!: Knights of Eight are warrior sent by their Deep Lords to fight the Great Old Ones and their minions. At the beginning of each adventure (as dictated by the Judge) a Knight of Eight can enter a deep telempathic trance and request armament and equipment from his superior. These items are them teleported to the presence of the Knight, based on his level and roll (check the class table).

If a Knights of Eight rolls the result for an item he already have (except exalted pearls), give her 1d4 pearls instead.

On exploding peasants and alien tech: if a non-Knight of Eight tries to use any of the above items, the Judge is within his rights to declare the action as a failure. But players being players, they’ll try to come up with weird ideas for activating the lance and the grenades. Let them roll a 1d10 and remember that a natural 1 is a fumble.

Posted by Tzimiscedracul at 4:04 PM 0 comments