A friend of mine recently asked for my opinion regarding his new Forgotten Realms campaign for D&D 5E. He had an awesome idea to "reskin" the lore of the Realms, mixing it with Tolkien's Silmarillion. My favorite part was when he created alternative racial traits for the various human ethnicities of the Realms - in particular Chondathans, Calishites, Tethyrians, Damarans and Illuskans.

While I really liked his racial traits, I suggested going for less mechanics and more flavor. Of late I'm a great fan of racial traits that give thematic or flavorful abilities instead of just more modifiers/feats (you can see my last attempt with this approach for Pathfinder here). I was inspired by an excellent thread on RPGNet which suggested that each human "race" should have a unique knack (not just a +1 to Str, but something cool like "can talk with wolves" or "has a living shadow").

Here are my suggestions (because my friend was disregarding the cannon, I was not too worried with the official description of each human nationality). I tried to create Edition Neutral traits. Major inspirations were RPGs PbtA (like Dungeon World and Blades in the Dark), but I can't forget great ideas from 13th Age Glorantha and Frostbitten & Mutilated. I must stress that all traits below were created with PCs in mind - these abilities are extraordinary stuff and shouldn't be taken as "normal" racial traits for every NPC of the same ethnicity. 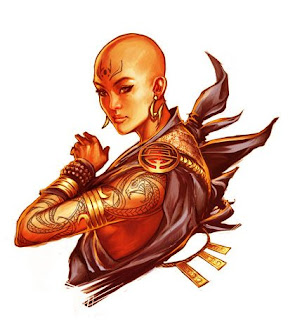 Trait: Brother to Fire
Description: Calishites claim to have the blood of Efreeti, the powerful fire genies born of Smokless Fire. Calishites have indeed a fiery temper and an uncanny affinity with elemental fire. Once each game session (or once per long rest, DM's call), a calishite can summon his elemental affinity. This may be a conscious effort or not (probably a calishite wizard would say a mystic word or two, while a calishite warrior would say "it was luck"). When summoning his elemental affinity (a free action), the calishite can change any non-magical fire in his close proximity. For example:
- make a torch go out;
- keep a torch burning for another round, even if it should have go out;
- rekindle a dying fire;
- declare that a fire source nearby won't reveal his presence (for 1 round only);
- declare that a local fire source won't damage him (for 1 round only).
The DM has the final say. This trait should be adapted to the campaign's flavor - the calishite's affinity can be made to seem like pure coincidence or something clearly supernatural. 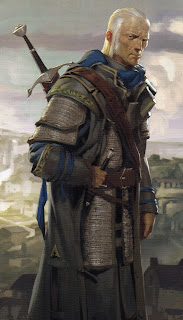 Trait: The Gift of Tongues
Description: Your people traveled the Realms. Some legends say that a god blessed Chondal, the Patriarch, thus enabling his progeny to spread through Faerûn. Once each game session (or once per long rest, DM's call), a chondathan can understand something said by another intelligent creature or they can make themselves understood by another intelligent being (usually something that can be said during 1 round). This trait can be roleplaying intuitively (for a bard or wandering warrior) or as something clearly supernatural (a priest or wizard). If the DM is following a more mythic or high-magic campaign, this trait can be used by a chondathan to understand "words" spoken by beasts, monsters or even special objects (a magical sword) or places (a holy place). 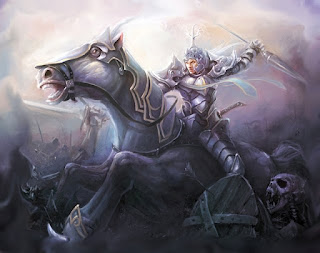 Trait: Born under the Scythe
Description: Damarans are said to be brothers of Death (or the Hooded Ones, given that the gods of death are many, like Myrkul or Kelemvor). Their history is a long and sad struggle against overwhelming forces of Darkness - like the Witch-King of Vaasa, the infernal legacy of Narfell, the barbarian Tuigan or the hobgoblin steel of the Red Hand. Damarans forged a civilization in inhospitable lands, living since then under the edge. Fatalists but strong-willed (some damarans are described as "cheerful maniacs"), they learned to live "under the Hooded One's Gaze".  Once each game session (or once per long rest, DM's call), a damaran can walk around a place and feel in his heart the answer to one of the following questions:
- Has someone died here since the last sunset/sunrise?
- Where is the closest place where blood has been shed?
- Has any undead or fiend passed by since the last sunrise/sunset?
Finally, if the DM is willing to play the symbolic/thematic aspects of this trait, any undead/fiend found by the damaran will always know his name or seems to be expecting him/her. The creature will still follow it's nature (probably attacking or devouring the damaran), but the affinity can be explored by the damaran PC to gain valuable information. 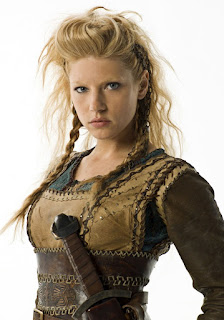 Trait: Friends to Crows
Description: the crow is one of the various symbols of the Savage North and was once the heraldry of Luskan itself. Illuskans have a legend that says that a crow can only be killed by one who have killed his kind. Illuskans respect and honor crows, seeing the birds as family. Once each game session (or once per long rest, DM's call), an illuskan can spend a few hours searching for a crow***. After meeting, feeding and befriending the bird, the illuskan can get the answer to one of the following questions (this can be a literal answer from a crow, if the DM likes a more mythical campaign, or it can mean an omen or intuitive knowledge - a gut feeling - from the illuskan):
- Are we being hunted or followed?
- Are there other humanoids closeby?
- Is there any haven nearby that we can reach before sunrise/sunset?
***If the party is any region where a crow can't be found - and the DM is willing to keep this trait thematic aspects - feel free to use other birds (vultures, ravens, falcons etc.). 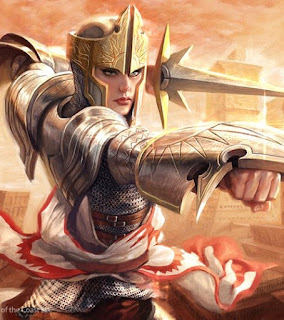 Trait: Oath of Truth
Description: Tethyrians live (and die) under oaths of vassalage and fellowship. Their entire kingdom is kept by those oaths and there is nothing more sacred than that. It is whispered that a god blessed tethyrian's oaths - probably Helm, Tyr, Torm or even Siamorphe.  Once each game session (or once per long rest, DM's call), a tethyrian can declare an Oath of Truth. Everything said by the tethyrian after the oath will be accepted as truth by all bystanders. The tethyrian must believe in what he/she's saying. Note that this isn't brainwashing - all parties in the scene will know, in their heart, that the tethyrian said the Truth, but they have total freedom to choose who they'll react to that Truth.

Posted by Tzimiscedracul at 7:01 PM 0 comments