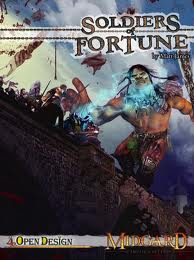 Soldiers of Fortune is the newest book from Open Design for D&D 4th Edition. This one actually took me totally by surprise, because I didn’t remember reading any advertising about it. Anyway, I was instantly hooked by its premise: mercenaries!
Since reading Black Company (both the RPG

) I became an enthusiastic of mercenary campaigns in fantasy settings. The army structure, the designated missions, the loot, the interaction among soldiers and their employers… its fine gaming material to practically any group.
But I digress… Soldiers of Fortune is also devoted to Open Design’s new Midgard setting, following the same pattern of sourcebooks like Sunken Empires

(ok, this one also deserves a review).
Soldiers of Fortune opens with a thematic exploration of war: religion, patriotism, invasion and other classic casus belli. Each theme is followed by adventure hooks of the three tiers of D&D 4th. A nice touch of the author is the suggestion of using and merging tradition D&D play with miniature games like Warhammer Fantasy.
The second chapters give us short descriptions on how the main races of the Midgard setting go to war. The curious bit here is that Midgard is a multi-system world, so we get in Soldiers of Fortune details about tieflings, dragonborn and deva – races absent from Midgard products dedicated, for example, to Pathfinder. It’ll be interesting to see how Open Design manages this philosophy in the future.
We also get extensive new skill challenges, simulating basic war events like mass battles, sieges and even en entire military campaign. While the author gives advices about how to use the challenges, there’s always the danger of a campaign degenerating to nothing more than a few abstract rolls. At least one full example would have been helpful.
Chapter Three was probably the hardest for me to read. It’s based on Sun Tzu’s teachings and while I can see why some people would enjoy that, I find it boring as Hell. Histories about great wars in the Midgard setting or at least texts written more “in character” would had been more engaging for me. The chapter also has new backgrounds and statistics for two legendary generals – whose excellent idea deserved more pages.
Chapter Four is for mechanics. First we get a new theme: mercenary; and its assorted powers. The mercenary basic encounter power allows a character to shift 2 spaces with a move action. The new feats are all very interesting and innovative, especially the Commander feats, that greatly increase the utility of the Aid Another action. After these we finally get a selection of new powers for mercenaries and other classes. At the chapter’s end there are four new Paragon Paths, representing classic archetypes: the basic soldier of fortune, the arcane mercenary, the divine mercenary and the war veteran. Although understandable (mercenaries are a traditional element of low fantasy) I do missed a new epic destiny – maybe something dealing with planar mercenaries or about a truly old and scarred veteran, whose tales are more myth than reality to the common soldier. But I do admit that this last criticism is something very personal.
Chapter Five is your traditional magical paraphernalia section. The highlights among the items are the Midgardian battle standards. We also have new rituals and martial practices (among these things like Forced March and Hidden Ambush).
The next chapter is a short adventure for 7th level characters dealing with a mass battle (and its preparations).
Chapter Seven is my favorite. There are new NPC templates (like the awesome Jittery Conscript) and new rules for minions (minion aura and minion horde). Soldiers of Fortune provides full monsters stats for soldiers of the core races of Midgard, including mercenaries (who get their own subtype and characteristics), in addition to some new monsters. The chapter also details siege engines and give little (but appetizing) bits of lore about Midgard – almost a mini-gazetteer –, concluding with a stats for Perun, God of Lightning and War.
Soldiers of Fortune is a hard sourcebook for me to recommend. Although its text and editing are topnotch, the first chapters are sparse in terms of interesting content (with the skill challenge part deserving a better explanation). The second half more than compensates for that, especially the last chapter, but you better be aware of this.

Posted by Tzimiscedracul at 8:19 PM