Wow! I noted only yesterday that I reached my 100th post. I never thought I would reach that mark, much less in such short time (for me at least). I just would like to thank all my followers and readers! And especially my multiclass love Mandy (high level girlfriend/wife); after all, it was due to her encouragement that I started this mad experiment. 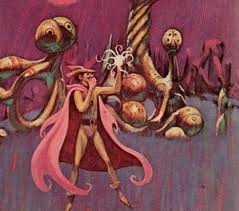 ”, I’m convinced that calling the D&D/Pathfinder magic system of “vancian” is a premature assumption. I actually prefer to call it “gygaxian”, but in the end that’s just semantics. I don’t really know if it was Gygax or Anderson the main responsible for the original magic system, but I know that Gygax’s magic system for Chainmail was radically different (and, in certain aspects, closer to the way that spells operate at Vance’s novels).
But, as usual, I’m digressing. In the Dying Earth universe, magic is closer to a form of hyper mathematic (or some kind of fallen science), than an authentic occult lore. Each spell is a very precise and delicate formula directed, maybe, to a universal machine or (semi) sapient cosmic entity. A computer code for reality, if you like. Even a tiny mispronunciation (or hesitation) can spell doom for the caster (no pun intended). The fact that a spell is in fact a type of “meta-code” that our brain can’t normally store and process, thus creating the whole dweomer “memorization”, is one of the Dying Earth’s basic premises.
What I intent do here is a little “hack” for Pathfinder, emulating that idea (at last my vision of it). For example: differently from Pathfinder, Vancian spells can’t be memorized multiple times, there aren’t any level limitations and most dweomers are amazing specific in their effects (true magical versatility in the Dying Earth universe is left to a few archmages, like Rhialto or Idelfonse, normally through the use of sandestins).
The house rules below are necessarily short and (I hope) to the point. They’re more like guidelines and definitely not a new magic system.
"True" Vancian Magic in 10 Steps
Cantrips require a Spellcraft check (DC 10) to be cast, can be used at will (without memorization) and a failure doesn’t incur in any penalty.

Posted by Tzimiscedracul at 5:20 PM