Stealing from the 13th Age - The Icon Relationship Rolls


OK, time to steal the Icon Relationship Rolls from 13th Age (the Archmage Engine) to DCC RPG. In case you’re wandering what I’m talking about, check my 1st post here.

Icons are basically 13th Age’s way of dealing with factions. In that game’s standard campaign setting (The Dragon Empire), the Icons are the highest-level NPCs of the world, its movers and shakers. All PCs in 13th Age are linked through their backgrounds to 1-3 Icons, already at 1st level. Usually this relation is through proxies, groups and followers of an Icon, but because 13th Age is all about high fantasy, it isn’t that rare for a 1st level PC to actually have met and interacted with a powerful Icon (it’s already a cliché in 13th Age community the idea of PCs that are bastard children of Icons – especially the Emperor, the Diabolist or the Archmage).

Icons are an excellent way to “ground” the PCs in the intrigues, plots and events of the setting. Instead of placing those NPCs as distant characters, forever busy with ineffable agendas, 13th Age links the PCs directly to them. And the PCs are not random wanderers and tomb raiders, but character linked with the most powerful and influential forces in the world.

The Icons are thus used as building blocs for the setting and also as a great tool to build adventures/campaigns. Each PC starts with 1-3 points of Icon Relationships. These relations can Positive (the PC is an ally of the Icon), Negative (the PC is an enemy of the Icon) or Conflicted (it’s complicated; for example: the PC is a hero, but from a bloodline known to serve an evil Icon). Because the PCs pick Icons at the beginning of the game, the GM knows which NPCs the players want to see in their games. At my table, for example, there is a lot of points invested in The Three – the villainous blue, black and red great wyrms of the Dragon Empire – so I knew that the party would be interacting and facing lots of draconic foes and themes.

OK, how does an Icon Relationship works? At certain times – usually at the beginning or end of a session/adventure – the PCs roll 1d6 for each Iron Relationship in their character sheets. Each ‘6’ means that the PC gets a special advantage due to his/her relationship with the Icon. Each ‘5’ means an advantage, plus with a complication (to make it clear, the PC must still get good stuff).

What is an advantage exactly? In 13th Age that usually means a one-use magic item (potions, runes, oils etc.) or maybe a true magic item if you PC is running low on them. An advantage could also mean some NPC help in a scene or maybe an extra clue/information, or even a bonus to a specific challenge. However, the 13th Age Core recommends that Icon advantages should be narrative in nature (a good place to pick ideas for Icon advantages is by reading D&D 5E’s Backgrounds, especially their special features… things like military rank, access to temples, secret hideouts, alternative identities… all are great examples of benefits derived from Icon rolls).

So, an example: you have 2 Dice of Positive Relationship with the Archmage (the uber-spellcaster of the Dragon Empire) and 1 Negative Relationship with the Emperor (the awesome and probably dragon-rider Melnibonean ruler of the aforementioned Empire). First, that basically means that you have connections and are in good standing the Archmage; at the same time you’re on wrong side of the fence with Greatest Human Nation of the world. Why? I don’t know, that for your PC background. At the beginning of the session you’re lucky and roll a ‘6’ for the Archmage and a ‘5’ for the Emperor. That means your PC has 1 advantage with the most powerful mage in the world and 1 advantage with complications regarding the fact that the Dragon Empire doesn’t like you. What could that mean? Well, it depends on the PC’s level, background and the adventure itself. If you’re our usual low-level dungeon-crawler adventurer, that ‘6’ with the Archmage could mean you found a chest warded by agents of the Great Wizard that only you can unlock – by opening it you find some valuable healing potions. That ‘5’ with the Emperor could mean you found an unlikely ally in the dungeon – an evil humanoid that also deeply hates the Empire! Because this is a ‘5’, you only get his help if the party can help him face a rival tribe of humanoids.

If you like improvisation, then you’ll roll Icon Relationships at the start of the game session or adventure; if you prefer to plan the results ahead, then it’s best to use Icon rolls at the end of the session (then you’ll have the time to write all those benefits in the next session). There’s a lot more to the Icon subsystem, especially if you hunt for material created by the 13th Age community, but those are the basics.

As you can see, it’s ridiculously easy to change Icons to Organizations, Churches, Nations, Cults, Clans etc. (I would dearly love to use them in Planescape, to represent the Planar Factions of Sigil) Because the Icon Subsystems is so modular, it can be imported to other RPGs without any modifications (And I’d would run Planescape for AD&D 2nd, of course)

Icon Relationships are a great way of giving more flavor and versality to the Patron Bond spell, especially for non-spellcasters. Allow those bonded to a Supernatural Patron to gain Relationship Dice with their otherworldly masters. Here’s a suggestion for the spellcasting table:

*I usually interpret this as “casting this spell on a non-spellcaster”, that’s why I granted him/her more Relationship Dice. If that isn’t the case with your group, use the “When Cast on Self” part of the table, but always a step worse (if the Spellcheck Result was 28-29, use the 24-27 entry).

On the table above, where you read “per week”, you can instead use “per adventure/module”.

The basic premises are the same: if you roll a ‘6’, your Patron will help you in a small way. For example: you gain 1d3 Luck Points, you find a potion/scroll/one-use magic item, a helpful bit of information regarding the adventure (maybe about a trap, a monster or a secret passage), a friendly contact, a temporary hireling etc.

If you roll a ‘5’, you get the same thing, but your Patron is more demanding or there’re strings attached to the “gift”. For example, you find a lesser magic item, but it’s cursed/stolen; your party is healed but your Patron will revoke the effect if you don’t find that special artifact until midnight etc.

If you want a more universal approach to Relationship Rolls consider linking the Dice to major factions of your DCC RPG campaign. What factions? Well, if you don’t have any, try those implicit in the Core Rulebook. For example:

At the Thief Class…
- The Mob (time to work for the Godfather of Thieves);
- The Beggar King (the disposed, the pariah and all their all-seeing spies);
- The Warren (leaders of the poorer wardens/districts and underworld of cities);
- The Twelve Spider-Assassins (a clue: there’re more than 12).

At the Warrior Class…
- The Order of the Dragon (high-born monster-slayers);
- The Order of Saint Stephen (protectors of pilgrims and the realms of Man);
- The Fraternal Company of the Black Swan (guardians of the borders, used to fight against savage humanoids and demihumans);
- The Enterprise of the Green Shield with the White Lady (a romantic and chivalrous order);
- The Order of the Golden Spur (templars!).

At the Wizard Class…
- C’mon! Look at all those cool and dark Patrons!

The Dwarf, Halfling and Elf Classes are factions into themselves in my opinion.

Note that theoretically there’s nothing forbidding a Warrior from having 2 Relationship Dice with the roguish Mob, for example. Especially if you consider that option of Positive/Negative/Conflicted Relationships.

If you use Relationship Rolls during the sessions and run out of ideas, remember that DCC RPG already has a generic reward to use: Luck Points! When in doubt, if a PC rolled a ‘6’, grant him anything from 1d3 to 1d6 Luck Points, explaining it through his Relationships. For example, a Warrior with 1 Relationship Die with the Elves/Positive (either he’s a half-elf or was raised by them) rolls a ‘6’, but the Judge is out of ideas. Well, the Judge could describe a Tuk-Man or Sprite showing up to guide the Warrior through the next encounters. The Tuk-Man/Sprite’s effect is represented by the extra Luck Points.

Most of the ideas above (except the Patron spell) can be used directly in either Pathfinder or D&D 5E.

In Pathfinder you already have a lot of subystems for organizations, contacts and reputations, so the GM will have to think if the Icon Relationship Rolls are necessary. They can be a good alternative as a “lighter” take on factions for Pathfinder. Maybe you can link the Relationship Die effects to Hero Points, or to bring extra NPCs from the Gamemastery Guide or the various Codices.

For D&D 5E things are simpler. You can grant each PC 1 Relationship Die, linked to their Backgrounds at 1st level, and grant a new Die every time their Proficiency bonus goes up

Posted by Tzimiscedracul at 5:32 PM 0 comments

One of the PCs in my current Concord game (of our 13th Age campaign) was recently bitten by a werewolf.

Because I'm such a nice GM I’m using the werebeasts stats from 13 True Ways and the Cursed Bite ability. Basically, that means that the party's PC (a human wizard) will become a new werebeast in the next full moon.

Of course, there's an artifact in my campaign that just happens to summon the moon closer to the Dragon Empire. So, while the wizard was very happy with all that Overworld mojo increasing his spells (due the moon’s proximity to the mortal realm), he was considerably distressed about his new "condition".

I wanted the lycanthropy rules for afflicted PCs to follow the 13th Age's ethos: they must be fun, simple and "gameable". However, I was also in a very short time to tinker something more robust, so I stole the rules.

Instead of just saying that the wizard morphed into a full werewolf on the spot when the full moon was up, I created a table, based on the Wendigo's Hunger effect (from page 211 of the 13th Age Bestiary).

Lycanthropy: those affected by a Cursed Bite attack are susceptible to a series of special triggers and must save (usually at 16+) or roll on the following table (1d6) once per turn.

Common triggers are things like seeing the full moon, smelling raw meat or witnessing a bloodshed battle. It's safe to assume at least 1 trigger per lethal combat. Personally, I like to trigger an afflicted a PC, during combat, at Escalation Die 3 or 4 (when the combat is well underway and there're probably a few fresh corpses scattered around the scene).

*If the GM is feeling generous (or devilish), the afflicted PC’s basic unarmed melee attacks now do at least 1d8 or 1d10 per level (either because of a lycanthropic bite or claw). 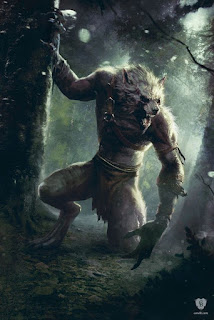 Posted by Tzimiscedracul at 6:53 PM 0 comments