One of my players (Leoz) gave me a nice idea for an Ork racial feat (from my Middle-Earth Ork post).

If it ain't broke, don't fix it
Orks are renowned for fighting with their blades chipped or shattered, all without hindering their prowess or savagery. That when they aren’t breaking their blades on their enemies’ faces.
Prerequisite: Ork blood.
Benefit: You ignore the broken condition modifiers when attacking with damaged weapons. Once per encounter, after striking an adversary, you can add the broken condition to your weapon to automatically confirm a critical hit or to inflict maximum damage.
Note: Extra damage dice (from class features like sneak attack or from magical enhancements) must still be rolled. 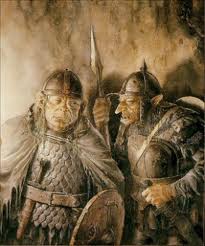 Edit: Just an addendum. If the weapon already has the broken condition, then it's destroyed (after inflicting the damage).

Posted by Tzimiscedracul at 4:28 AM 0 comments

Here’s something I wanted to do for a long time: a version of the ‘original’ orc from Tolkien to Pathfinder. Forget D&D and – most important – forget Warhammer and Warcraft, which are the main culprits for today’s idea about what an orc is: a brute, barbarian and green-skinned warriors (a mix between the Hulk and Mongols if you like).

I always loved the way Tolkien described orcs in ‘The Hobbit’ as a race of cunning and clever trapsmiths, weaponsmiths and armorers, which a taste for back-stabbing and violence (and fresh meat). Actually, given those descriptors, ‘orks’ (as Tolkien wished to call them later in life) are ironically well-suited for a player character race: they love to fight, to tinker with weapons and mechanical stuff, and to conquer. Sounds familiar? 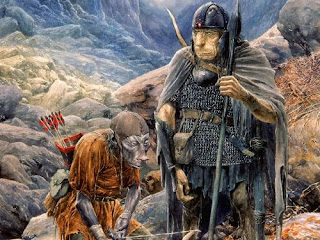 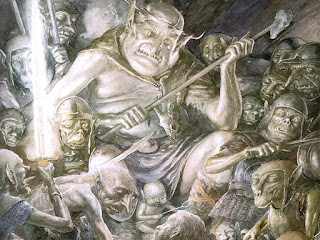 I tried to balance the fact that Orks are relatively weak at Ability Scores by granting them more racial features. Not sure if it worked properly. My main concern is the Warmonger feature. I think it may be too powerful, but I also believe that it represents the “iconic feature” of the archetype. Orks are total weapon-nuts. In Pathfinder – if I’m not mistaken – only the Druid, the Wizard and Monk aren’t proficient with all Simple Weapons; while the Barbarian, Cavalier, Fighter, Gunsliger, Paladin, Magus, Ranger and Samurai all have full-access to Martial Weapons. Giving access to Simple Weapons isn’t much. I don’t think that proficiency with all Martial Weapons is a game-breaker (unfortunately, as I really wished that weapons matter more in Pathfinder… maybe if you used Paper & Pencil’s suggestion on weapon qualities, but I digress). So, I decided to grant them martial weapon-access, and a conditional reduced penalty for other weapons, besides a small bonus to siege stuff. 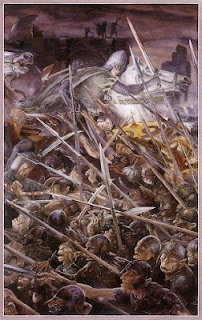 Posted by Tzimiscedracul at 2:04 AM 0 comments

Here’s a new spell. With any luck next weekend may give me the time to finish that Green Book entry on the Alalas.

I designed this spell for my (no yet started) G+ sandbox campaign based on the Forgotten Realm setting. I managed to run one 'test drive' session two weeks ago, mainly to show the G+ Hangout tool to my old players. It worked well above my expectations (I'm and will always a fan of "true table-top" sessions). Because our session was scheduled to last 2 hours, the entire game was a lot more focused and organized than previous campaigns (otherwise we would barely finish one encounter or NPC interaction). This test drive convinced me to keep in touch with my old group and to try new things (technologicaly speaking). When we really start the real thing (hopefully on April 2013), I'm ansious to see how things will go.

This spells allows the caster to control any mist, fog, smoke or smog around him. He can command the fog to assume shapes, open corridors in the mist or even to dismiss it entirely from a 30 ft. radius area centered on him. The caster must have line of effect to the fog.

If the caster attempts to confuse other creatures by creating shapes within the fog, allow the targets a Perception check (based on sight) to determine the false nature of the vaporous forms (as a suggestion, allows an opposed check between Perception and a caster level check).

Once a caster ceases to concentrate, the spell remains in effect for another 1d6 rounds.

Olorin’s acquiescent fog is known among druids as mischievous mists and among witches and bard as witchfog. Druids require mistletoe as a material component.

Finally, Olorin’s acquiescent fog doesn’t work properly on mists created by magic (as fog cloud). The caster must succeed at a Spellcraft check (DC 20) or the spell is interrupted and he becomes confused for 1 round.

Posted by Tzimiscedracul at 10:31 AM 0 comments