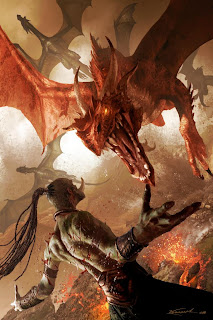 ), with the following differences:
-          Jaghut can substitute Constitution for Charisma for all spellcasting and bloodline purposes, drawing their arcane power from their vitality rather than force of personality;
-          Jaghut can spontaneously change the elemental damage of any spell to cold damage;
-          All cold spells cast by a Jaghut are affected by the Empowered metamagic feat for free;
-          Jaghut have fast healing 3 if they have access to their spellcasting abilities;
-          Jaghut have a +2 deflection bonus to AC (and CMD) and +2 protection bonus to all saves if they have access to their spellcasting abilities;
Jaghut that buy levels of the sorcerer class add them to their racial HD to determine caster level, spells known, spells per day and bloodline powers.
Orc’s Forefather (Ex) Jaghut are possible the primeval creatures from which today orcs are the fallen offspring – maybe corrupted by a dark deity or abyssal force. Jaghut are treated as orcs for gaming effects.
DESCRIPTION
The Jaghut are an ancient race of humanoids, older then even the elves and probably one of the first sentient creatures to walk the world. Albeit of bestial visage and posture, the Jaghut have keen intellects and a profound thirsty for arcane and philosophical knowledge. This urge is so strong that, in their meditations, the Jaghut rarely suffer the presence of other creatures – including Jaghut. However, they are pacifists and favor an isolated and spartan lifestyle. Jaghut dwelling are located in the far corners of the world and are usually simple and resilient stone structures.
Their quest for knowledge and understanding of the universe led many Jaghut to learn magic and tamper with other living creatures, mostly with scientific purposes. It is speculated that many beasts and even some sentient races are the result of Jaghut experiments.
Jaghut are natural spellcasters with a deep resonance for ice and boreal magic. This trait is reflected in the race’s tendency to guard and hoard all things that it finds worthy – the last ice age of the world may even have being a massive Jaghut attempt to prevent the coming of a cataclysm or great alteration. Some sages ponder that the Jaghut’s powers as “world-keepers” hint to an ancient purpose or mission bestowed upon the race by some elder or forgotten power, deity or even pantheon.
Ironically, this pacifist and neutral race suffered most for the crimes of their few. The so called Jaghut Tyrants were individuals burned by a desire of not only hoarding knowledge but also controlling all living things around them. These insane and power-hungry arch-sorcerers literally enslaved entire civilizations and laid waste to continents, eventually being destroyed or trapped by their own race or their old undead nemesis – the T’lan Imass. The T’lan Imass were once a living humanoid race, until after a harrowing ritual their embrace undeath to stop the depredations of the Tyrants. The problem is that the T’lan Imass didn’t stop there. They killed all Jaghut in their path until only a handful of individual survived to the present age of the world.
Variant: Jaghut Tyrants
These Jaghut shun the isolationist and peaceful way of their tradition brethren. Consumed by a deep desire for power and control, they seek to dominate all creatures leaving over their region. Many Jaghut Tyrants disguise themselves as deities for tribes of human, giants or orc savages.
Jaghut Tyrants usually have 15 racial HD and equivalent sorcerer powers. They usually have high ranks in the Intimidate skill. Their domain of Omtose Phellack doubles their fast healing, deflection and protection bonus and grant to all their cold spells the Maximize metamagic feat for free. Jaghut Tyrants gain dominate monster as a spell-like ability usable at will.
Finally, they can store their power inside an object called a Finnest, which works like a lich’s phylactery, guarding the Tyrant’s life force. If his body is destroyed, the Jaghut can, as an immediate action, transfer its spirit to any humanoid creature at a distance of 5 miles. If this creature fails a Will saving throw, its original soul goes to the afterlife and its body instantly reforms to the shape of the Jaghut Tyrant (with half his maximum hit points). Creatures that successfully resist this effect are immune for the next 24 hours. The Jaghut spirit lingers in the area until his Finnest is destroyed. Orcs suffer a –4 penalty to saving throws against a Jaghut’s dominate monster and possession spell-like abilities
A Jaghut Tyrant can always feel his Finnest even across planar borders.
A Little but Important Disclaimer: I’m a recent fan to the Malazan Book of the Fallen

, from where the Jaghut originated. I’m still in the fifth book of the series (of a total of ten) and I don’t know all the things to know about both the Jaghut and the amazing world created by Steve Erikson. This article is a personal adaptation of the Jaghut to Pathfinder, without any concern for the cannon (especially the orc-blooded thing, which I totally made up). I’m aiming here for the “fantasy mash-up” feel of the original D&D, with its Tolkien’s balrogs and Paul Anderson’s trolls. The Jaghut are just the more recent arrival. I hope you like them.

Posted by Tzimiscedracul at 5:13 AM