The design behind my "Thematic Races" 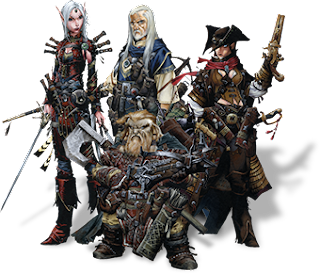 Thank you for the feedback regarding my “Thematic and Simple” versions of Pathfinder Core Rulebook races.

First, it’s now clear that they aren’t simple. I guess that’s in part due to my lack of skills with English and text organization. Anyway, I’m editing the previous posts titles to “Thematic Pathfinder Races”. I hope to better edit them in the future (maybe a PDF, never did one before).

The basic idea/principles behind these alternate race rules are:


Thus, I removed all modifiers and little mechanical bonuses. I tried to exchange them for daily rerolls or similar traits.

Each race now basically gives you this:


The Detrimental Trait works almost like a FATE’s Aspect (if you know FATE then you can see the Detrimental Trait as a sort of “specific Aspect”, one that can only be activated negatively). The idea of the Detrimental Trait is to showcase a specific racial “flaw” and to grant a new daily use of another racial trait (I find it more interesting than a boring -2 to some Ability Score). It’s a rule that does requires cooperation between the GM and the Player.

Explanations given (I hope), this is your basic racial traits for a 1st level Elf Ranger:

A 1st level elf wizard would maybe choose these:

Note the “”. I use it to mark when a specific Racial Trait is activated. It’s just a suggestion.

So, at 4th level, our Elf Ranger could choose to take a new Racial Trait. His abilities are now:

That’s all for now. I’ll try to post the Half-Orc next.

As always, any feedback is really appreciated.

Posted by Tzimiscedracul at 6:29 AM