I’m still trying to work out how to model Humans. To be fair, I don’t know if Humans really need a “Thematic Race” version (I like the extra bonus feat and skill rank). However, I want to try something in order to given them a Racial Flow and a “Reroll” system.

About the Half-Elves, I’m aiming for a mix of versatility and diplomacy. I was pondering if it was worth to use Pathfinder Unchained’s Variant Multiclassing instead of the Multitalented (I don’t like Favored Class as written and don’t the rule almost since D&D 3rd). In the other hand, Variant Multiclassing seems to much trouble.

Finally, I’m revising the Elf, Dwarf and Halflings entries, to follow the new format. I will try to post all of them in a PDF file. Maybe next week.

OK, that’s it for now about the project. Let’s see my Thematic Gnome.

As you can see here, here, here, also here and finally here, I have a personal obsession/problem with Gnomes. I really like Paizo’s version, even though I also want to push the theme (and mechanics) further. I’ll try to control myself here… without any hope of succeeding (as I already removed the Hatred and Defensive Training traits, which I believe are leftovers from previous editions where Gnomes were just cousins to Dwarves). 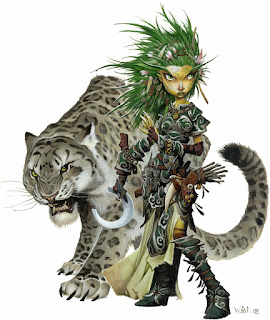 Glamour: you may freely cast, as a spell-like ability, dancing lights, ghost sound and prestidigitation. Once per day, you may cast silent image. The caster level for these effects is equal to the Gnome's level. The DC for these spells is equal to 10 + the spell's level + the gnome's Charisma modifier.
If you and your GM are fine with the idea, feel free to change the 3 cantrips above, to better suit your Gnome.

Feyblood: once per day, you can reroll a Bluff or Stealth Skill Check or a save against Illusions. This is my basic “Fey Basic Trait”. You’re good at cheating, sneaking and seeing through glamour, which are things I believe every fey should be good at.

Otherworldly: once per day, you can reroll a Use Magic Device or a save against a spell or spell-like ability. You can make Use Magic Device Skill Check even if untrained.  You can feel the presence and general direction of portals and similar effects within 60 ft.
The way I see it, a Gnome should sense even the smaller planar intrusions, like summonings and teleports. 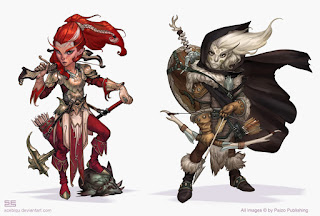 Racial Flaw
Choose one of the Flaws below.

First World Memories: your fey heritage is stronger. Once per day, you can choose to be of the Fey creature type. If the GM approves and you suffer a disadvantageous or harmful effect because of it, you regain the use of any of your racial traits.
A personal suggestion here would be that, besides specific spells and class features that already affect fey creatures, you’re also vulnerable to cold iron. Perhaps, you’re fatigued/exhausted if exposed to cold iron; or a cold iron weapon can automatically confirm a critical against you.

Bound by Oaths: if you give your word, you’re bound by it. Once per day, if your liberty of action is seriously hindered by a sworn oath, and your GM approves, you regain the use of any of your racial traits.
You can even break your oath and suffer a curse, if both you and your GM are fine with that.

Fickle and Impulsive: once per day, during a non-combat encounter, you can react in an unreasonably fashion to something otherwise completely mundane (a suggestion would be to roll a die: if it comes even, your reaction is ridiculously disproportional; if odd, your reaction is the opposite of what would be socially expected). During the chosen encounter (or about 5 minutes), you always roll twice and pick the worst result. If your GM approves, you regain a daily use of any of your racial traits.
I’m still not happy with this Racial Flaw. I was trying to model the idea that fey are unpredictable. Offering a free drink to a Gnome can either leave her hopelessly in love – even with a half-orc bartender – or completely in rage.

Gnomish Collection: pick a type of relatively common item – like paintings, maps, clocks, helms, locks, carpets, flags, coins etc. You manically collect and store the chosen item. Once per day, if your mania puts you in trouble and the GM accepts, you regain the use of any of your racial traits
If you choose something like coins or gems you’re in for some real trouble, because you won’t see it as money.

Bleaching: you lost your gnomish collection, broke a (really) sacred of oath, suffered torture under cold iron or otherwise endured a fate equally dreadful. In the end, your fey heritage was purged from you. You have a pale and greyish complexion. Once per day, you can ignore a morale bonus, healing or otherwise beneficial effect. If your GM approves, you regain the use of any of your racial traits. 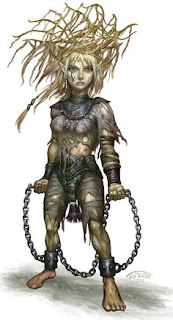 Advanced Racial Traits
Every time you gain an Ability Score Increase due to Level Advancement (4th, 8th, 12th, 16th and 20th) you can choose instead one of the traits below.

Animal Speak: you’re constantly under the effect of speak with animals, as a supernatural ability. The caster level for this effect is equal to the Gnome's level.
Because it’s flavorful and fun!

Dream Feast: you don’t require food or water for 24 hours if you sleep at 30 ft. of another intelligent (Int 3+) creature that also sleeps and dream. Once per day, during your sleep, you can enter another’s dream and ask one question, as if using speak with dead. An unwilling dreamer can attempt a Will save (DC is 10 + half the gnome’s level + the gnome's Charisma modifier).

Fey Step: once per day, you can become incorporeal for 1 round as a swift action.
I’m totally stealing this from the Dawnforge Campaign Setting.

Gnome Fighting Style: you treat any weapon with the word "gnome" in its name as a martial weapon.
If you are already proficient with any of the weapons above due to a class feature, you gain a daily reroll to attack rolls, combat maneuver checks or damage rolls with those weapons.

Pixie Friend: creatures with the Fey subtype won’t attack you unless provoked. Once per day, you can reduce your size to Tiny for one encounter (or about 5 minutes) as a supernatural ability. The caster level for this effect is equal to the Gnome's level.

Touch Emotions: emotions are almost a physical thing for you, they can be smelled, seen or even touched. With a full-round action you can tell the emotional state of any creature within 30 ft. and, if desired, establish telempathic contact with them, sending simple emotions and ideas. If telempathic communication is established, the target knows it’s origin.
Telempathy is used here as limited form of mind contact, usually one-word thoughts, like ‘Danger!’, ‘Help!’ or basic emotions/impressions like Anger, Happiness, Fear etc. 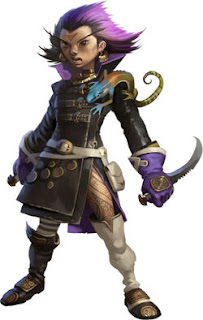 I’m leaving the biggest Advanced Racial Trait for the end. The idea was to give more flavor, but I think I overstepped. If it’s not fun for the table and the GM, please ignore it.

Gnomecraft: you can do a week’s work in a day with your Chosen Skill. The Chosen Skill must be a Craft or Profession. The Chosen Skill must be connected or associated with your Gnomish Collection Racial Flaw. This racial trait can be use only once every 7 days (or once every other game session).
Finally, choose one of the secondary benefits below:
- Fey Restoration: you may freely cast, as a spell-like ability, the cantrip mending. Once per day, you my cast make whole. Both effects have a casting time of 1 minute and a caster level to the Gnome's level. Requisite: your Chosen Skill must be a Craft.
- Glamour Item: you can create a large or smaller masterwork item made of ordinary objects. This consumes your weekly use of Gnomecraft, requires 10 minutes and can only be used to make common items (nothing alchemical, neither explosives, engines, clockworks etc.). For example: a rope made of leaves, a shield made of twigs, a plate of paper etc. The Glamour Item work as a supernatural effect with a caster level equal to the Gnome's level. Only 1 Glamour Item can exist at a time. Requisite: your Chosen Skill must be a Craft. (It isn’t necessary to stress that Glamour Item requires GM approval. In my games, I like to rule that Glamour Item can be instantly dispelled by cold iron.)
- Gnome Master: you always take 20 with your Chosen Skill, without taking extra time or spending more money. (Yes, this may be overpowered and might not work with other subsystems, like Downtime, but if a player buys it, he’s telling you that he wants to be a Super-Master-Craftsman – even in a dungeon crawling RPG – so, I hope to give this trait a few careful tries, watch out for combos, and see how it works.)
- Gnome Tinker: you can create a small or tiny animated object. This consumes your weekly use of Gnomecraft and requires 10 minutes. For example: a wooden toy, a clockwork bird etc. If stats are necessary, consult the Pathfinder Refence Document for elementals and animated objects of the small or tiny size. The Gnome Tinker object work as a supernatural effect with a caster level equal to the Gnome's level. Only 1 Gnome Tinker object can exist at a time. Requisite: 4th level Gnome, your Chosen Skill must be a Craft. (Again, this is a trait that expressively requires GM approval. And yes, I let it clear to my Gnome player cold iron can instantly dispel his animated ally.)
- Enchanted Performance: your fey skills can win friends in unexpected places and help allies. This consumes your weekly use of Gnomecraft and requires a few hours (when in doubt roll a 1d4). After executing your Chosen Skill for non-hostile NPCs (usually a group of no more than 10), you improve their attitude toward you and your party by 2 steps. Your Enchanted Performance also grants a minor fey blessing to those who witness it (again, usually no more than 10 creatures), for example: remove the Exhausted/Fatigued conditions, regain hit points as if after a full rest, grant the benefits of a goodberry spell (or other 1st level that fits), regain a daily ability (class feature or racial trait), gain 1 free reroll etc. Requisite: your Chosen Skill must be a Profession. (The GM has the final call and it’s hard for me to pinpoint a long list for this trait. I’m trying to encompass a lot of folklore: from a brownie taking care of a house, to a dryad dancing in the woods – these are things that, when watched by mortals should lift their spirits or refresh them.) 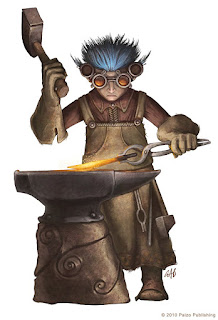 Posted by Tzimiscedracul at 3:45 AM