Random Thoughts on Minions and Pathfinder 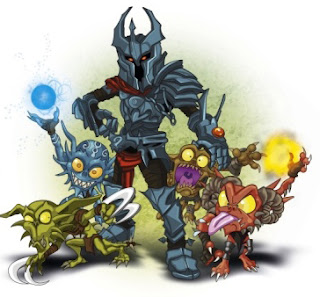 A few years ago I did a cinematic short campaign for Legend of the Five Rings, inspired in oriental action movies like Zatoichi and animes like the silly (but amazingly fun) Ninja Scroll. I remember using a house rule to reflect my minions mob that surrounded some of the main villains. In game terms those worthless servants were translated just as extra Wounds (L5R is a pretty lethal game). My players at the time loved the flavor of the rule – and the over-the-top battle scenes that it generated.
My Pathfinder campaign is now reaching the level 12 and I’m tempted to use a similar approach with minions to represent my evil high-priests’ and warlocks’ acolytes or guards. Actually, I think this idea may work better at Pathfinder, because Hit Points are already a very abstract mechanic.
So… how to do it?
I’m thinking in using a Simple Template (check the Pathfinder Bestiaries, or this link):
Minions Mob (CR +1 or +2)
Creatures with the minions mob template are surrounded by a group of lesser servants and defenders. Usually this mob occupies a 5-feet deep zone all around the creature.
Quick Rules: +1d6 damage, once per round, to all enemies adjacent to the creature; +20 hp for each 5HD, until these extra hit points are gone the creature can only be directly attacked with reach weapons and is considered to be protected by a soft cover (Pathfinder Core Rulebook p. 196 or here). These extra hit points constitute a separate pool of hit points and doesn’t share any kind of DR with the creature.
Rebuild Rules: +2 on all rolls (representing help from the minions); the minions deal damage as a swarm (use the creature’s HD to determine damage); +8 hp/HD or +20 hp – whichever is higher; immunity to flanking, critical hits and can only be attacked with reach weapons; the creature has soft cover (Pathfinder Core Rulebook p. 196 or here) and its sacrificing minions allow it to ignore area attacks as if it processed the improved evasion class ability. These extra hit points constitute a separate pool and doesn’t share any kind of DR with the creature. All the special abilities above are lost as soon as this extra pool of hit points is gone.

Posted by Tzimiscedracul at 8:31 AM