After three game sessions I’m proud to say that my cousin and his friends are officially into the hobby. One of them even told me that he’ll pick not only a copy of Swords & Wizardry (in portuguese) but also buy a second game and asked for my opinion – I humbly suggested Dragon Age, whose portuguese edition is really well done (and, damnit, its a box!).
Well, Swords & Wizardry did it again for me. I’ve being reading again and again this excellent restructuration of “The World Greatest RPG” for a little over a year now. I was eager to run it to my old gaming group – at the time I was aiming for a very lethal and traditional dungeon-crawl. With my recent move to a new city, my plans were completely frustrated and I believed it would take months to run another game.
Today we played twice. I built a little dungeon, thrown their characters inside as prisoners of the “Wizard of the Rock” and let mayhem ensue. Their first attempt to flee didn’t work out, in part because they tried to kill everything that crossed in their path. They also mistreated and abused the only neutral NPC their found. After being killed by a huge rat and her spawn – in a trap set by a disguised wererat – they built new “prisoners” and attempt a second escape. This time they took things more carefully, allying with other NPC prisoners and going slowly from room-to-room. They accumulated quite some loot in treasure and weapons, but ended seduced by the random mystical effects of the wizard’s magic pool – their last ally was polymorphed into a rat while the party’s magic-user, after enjoying a haste effect, tasted a second drop from the pool and followed the NPC through the wall’s slit. The last two members of the party were, respectively, killed by an animated owlbear carpet and caught as a slave by a group of half-orcs.
And again, even after these slaughters, they really loved the game and are already asking for a continuation (my cousin even bought some dices for him). During these games, I’ve tried to get used to the S&W feel and dynamic, specially its lethality. I’ve being tempted to employ some house rules to amend that, but after some thought I think I’ll continue to run it as written. The players are getting smarter with each session and I’m confident that I can create a campaign out of their next games.
Time to craft some dungeons... 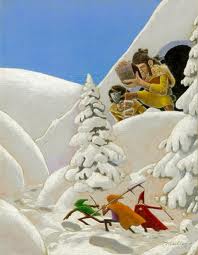 Posted by Tzimiscedracul at 2:04 PM