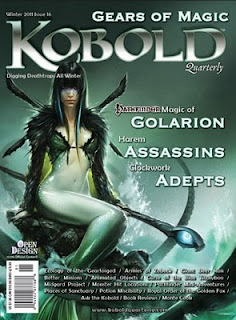 Kobold Quarterly #16 is out!
In this issue we finally have the official announcement of the Midgard Campaign Setting. Also from world of Zobeck, there’s an article on the ecology of the gearforged. After Eberron, mechanical races were a kind of hit, but I still find the geargorfed the most interesting application of the concept, in part due to the fact that they we created using humanoid souls, each one with memories and backgrounds from their previous life. The next article also details more of the Free-City by describing its courtesans and their sinister abilities and origins, followed by variant bard abilities, feats, spells and new items. For the 4th Edition, the Royal Order of the Golden Fox is an ancestral order of hunter from a falling kingdom of the Wasted West. Finally, the issue’s last article expands the Free-City by detailing its armies and uneasy neighbors.
For Pathfinder we have a group of new magic items Paizo’s RPG Superstar 2010, a new prestige class – the clockwork adept –; two adventures; an article about animated objects and another about sanctuaries.
The magic items are probably the best part, with really original and fun arcane paraphernalia like Batrachian Helm (tongue included!) and the Cacophonous Monkey. If any of these items were just a little more dangerous, we surely would have an authentic “old school” vibe article.
The prestige class is your typical specialized spellcaster, with a good benchmark ability at 10th level (the construction of a clockwork body to house the caster’s spirit if slain) but with some design decisions that I found unnecessary – like creating a new Knowledge skill category.
The first mini-adventure – The Curse of the Blue Titchyboo – deals with stolen goods and a tengu school. The second – Beer Run! – is based on the Frozen Empire’s patronage project (which is strangely missing from Open Design's site).
The animated objects article bring a lot of new construct traits, drawbacks and a new  spell – quite useful and entertaining for such limited topic. The material about sanctuaries follows the same vein, broadening  the concept of the sanctuary spell to encompass entire areas (like temples and holy grounds), with some great ideas like the roads of peace.
For the 4th Edition, the potion miscibility rules are definitely my favorite, bringing back some mayhem and fun to the game; while the next article has powers specific to minion-role enemies. Also an enjoyable reading, we have an article on hit location rules to spice encounters with monsters (like the classical Lernaean Hydra). Finally, there’s an article with new powers to convert your typical critter to a clockwork (or steampunk) version.
We have an informal interview with famous game designer Robin D. Laws, where he talks about Ashen Stars, his newest game, and the Pathfinder novel Worldwound Gambit. In Monte Cook’s short article we have an example of how to play outside a game’s rule and have a good item with it (albeit Monte’s example really steps over the metagame/disbelief line of things to my tastes).
Kobold Quarterly keep its position as the best d20 magazine in the market. A more than worthy heir to the classic (printed) DRAGON Magazine. The Midgard setting is already taking it fair share of the quarterly’s content and this issue has probably the most interesting 4th Edition articles to date. The Pathfinder pages on magic items, animated objects and sanctuary are also fine additions to any table.

Posted by Tzimiscedracul at 7:24 AM