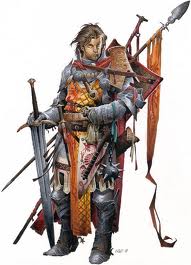 Here goes my second advanced maneuver for Pathfinder, please check my first article where I briefly explains the ideas behind these "exotic" fighter techniques.
As a side note, if you are using this advanced maneuver, you may want to remove the Bodyguard feat (from the Advanced Player’s Guide) from your game. Another option is to leave it as an alternative for non-fighter characters.
Advanced Combat Maneuver [Guard] (Combat)
Prerequisites: Combat Reflexes, fighter level 2nd.
Benefit: You acquire the guard combat maneuver.
Improved Guard (Combat)
Prerequisites: Combat Expertise, advanced combat maneuver [guard].
Benefit: You receive a +2 bonus on your guard maneuver checks. You gain an extra attack of opportunity each round that can only be used to guard someone.
Greater Guard (Combat)
Prerequisites: Improved guard, fighter level 6th.
Benefit: You gain a second extra attack of opportunity each round that can only be used to guard someone. You also can use guard maneuvers against ray attacks. Finally, you can attempt a guard maneuver even if you’re flat-footed and unaware of the attack, but you suffer a –8 penalty to your CMB roll.
Guard
When an adjacent ally is attacked by a melee or ranged attack that you are aware, you can use one of your attacks of opportunity to make an opposed CMB roll*.
If you have a shield while attempting a guard maneuver, you can substitute your weapon’s bonus to hit for your shield’s AC bonus on the CMB roll.
If your roll is greater than the attackers, the opponent’s attack is directed against you instead of your ally. Check if he rolled high enough to hit you. If so, you suffer all the attack’s normal effects.
Each time you execute a guard maneuver you expend one of your attacks of opportunity of that round.
*By the official Pathfinder rules there aren’t opposed CMB checks, but in the guard maneuver case I believed it makes more sense – after all you’re not attempting to hit your enemy but to block his attack. If this exception bothers you, please by all means keep the traditional Combat Maneuver system and roll the fighter’s CMB against the opponent’s CMD.

Posted by Tzimiscedracul at 3:47 AM