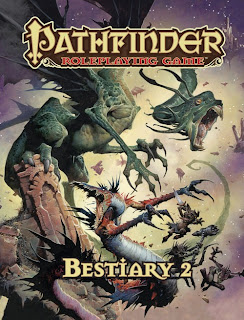 The Pathfinder Bestiary 2, from Paizo, is a gorgeous hardback with tons of new monsters. The book’s purpose appears to be twofold. First, it updates some of the basic creatures left out from the first bestiary, from the krenshar and the juju zombie, to the powerful nightshades. Second, it increases the GM’s options of high-level monsters with things like titans and the fey-like Tane – the most famous being the Jabberwock, who made it to the cover illustration. The book also brings back some classic creatures like the blindheim and the forlarren.
The Pathfinder Bestiary 2 follows the same formula of its predecessor – creature’s stats and a short description, sometimes with additional cultural or ecological information (or a variant of the base monster). All monsters also have illustrations, most of great quality (as expected from Paizo) – the exceptions  being, for example, the aforementioned krenshar and the aranea.
Some of the most interesting monsters from the Bestiary 2 are outsiders. We have here not only new devils, demons and angels, but also agathions (neutral good), archons (lawful good), azata (chaotic good), daemons (neutral evil) and proteans (chaotic neutral). The new kinds on the block are the Aeons, a race of true neutral outsiders whose names are inspired in Gnostic lore. We also have the Qlippoth, an chthonic breed of Abyssal creatures (readers of Green Ronin’s outstanding Book of Fiends my already now these cthulhoid menace).
A small fraction of the book is taken by updated monsters  from Paizo’s Adventure Paths, like the akata, denizen of Leng, gug and mandragora. As a side commentary: Paizo kept is Lovecraftian tradition with plenty of monster drawn from the Cthulhu Mythos and Dreamlands cycles.
Another curiosity is Pathfinder’s take on the genasi (elemental planethouced humanoids), whose names are drawn from real world mythology: the ifriit (fire), oread (earth), sylphs (air) and undine (water).
My only complaint about the book is the lack of any subsystem for quickly generating new monsters, especially at high levels where the creature’s stats tend to get really complex (I think I’ll have to wait for the next Gamemastery Guide).
The Pathfinder Bestiary 2 is an excellent resource for any game and complete worth its price and quality. The fact that book follows the OGL (and builds heavily and other companies’ works) is also another plus, as it strengths the d20 community.

Posted by Tzimiscedracul at 1:03 PM