The Chronicles of the Seventh Moon, Session 10

Day 6, Solar Month, 757 years since the Fall of the Gods, early summer
Crossing the gate, the Hammers of the Dawn entered a cave of massive scope – actually a hollow mountain. Magic lights illuminated the dark ceilings giving the impression of a starlit sky. Looking to the closer inner walls, it was possible to see hundreds of genasi slaves mining gems and precious metals for their dao overseers. Small islands floated inside the mountain, many covered with exuberant and fragrant jungles filled with exotic animals (little and multihued winged serpents were the most common). Some islands were linked by gigantic vines and strong roots. The biggest one was the heart of Shzamias’ kingdom, where an impossible palace of marble, ivory and crystal rose over the jungle canopy.
The party found a path of floating white stones that connected the gate to the palace island. Once there, the path twisted inside the penumbral jungle until it reached a beautiful pool, upon whose edges of sculpted stone rested silver jars, jeweled balsams and gold camphor. Nogard, the blind monk, heard movement from the shadows, mere moment before the Hammers were attacked by white gorillas. Heian’s fey gifts were enough to calm the beasts, while Hilguen was carried inside the jungle by the brutes. However, with some effort, the adventurers managed to scare the animals and regroup.
Ignoring the pool, they moved ahead and reached the palace’s bridge and gates. There were no guards, but, when the first adventurer touched the bridge, a bizarre genasi manifested from thin air. He was gaunt and was wearing a burned mantle and a grotesque mask somehow animated and fused over his face – actually he was the half-elf sorcerer Mask, responsible for the Hammer’s present situation. After summoning Shzamias’ power, Mask was punished and enslaved as a genasi*** (and palace gatekeeper). Now completely insane, the ex-sorcerer, always giggling, warned the group that the noble djinni only tolerated “the beautiful, the brave and the astute”. Hilguen (a paladin) and the halfing Garet declared themselves “brave”; Dricia and Nogard took the epithet of “astute”; finally, Heian (an elf) claimed to be “beautiful”.
The Hammers were then invited inside the palace, where they’re greeted by an entourage of apsaras (celestial nymphs) and genasi eunuch soldiers. Taken to luxurious rooms, they’re told that they’re “honored guests of the Eminent Shzamias” and would be received for an audience before the Black Crocodile Court. The adventurers had a king’s evening, drinking to otherworldly wines and succulent exotic meats, hearing to celestial music and enjoying rejuvenating baths, until finally falling to a magic dreamless sleep.
Day 7, Solar Month, 757 years since the Fall of the Gods, early summer
Summoned to the Black Crocodile Court, the Hammers were instructed to dress accordingly and were given whatever type of vestment they needed. While escorted to Shzamias’ throne room, they managed to get glimpses from the palace’s other wonders – chambers that led to the Elemental Realms, a room with a fountain from which flows not water but gens, a library guarded by demons with six arms etc. The heroes fittingly noted that brute force or eldritch might wouldn’t save them here.
Two gargantuan gates, opened by chains pulled by four elephants, revealed the Black Crocodile Court, filled with enough riches to ransom half the Shinning Principalities. Big silver pillars supported golden domes, wine filled its many pool and the ivory walls showed amazingly detailed scenes of heroes, champions, monsters and battles. Shzamias himself was surrounded by apsaras and dao slave-guards, seating on an enormous throne with the form of a three-headed crocodile with black onyx scales. A leskylor was lying at the djinni’s left, while a fire genasi (his vizier) was standing at his right. Shzamias was a giant djinni of blue skin, richly dressed. He didn’t have eyes and small clouds and lightning occasionally erupted from his empty eye sockets. When he spoke, more clouds left his mouth (always dispersed by an apsara with a peacock feathered fan). In fact, Shzamias seemed a storm barely kept in humanoid form. 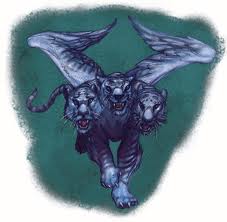 The more diplomatic-minded adventurers – Hilguen, Dricia and Nogard – bowed and showed their respects for the genie king. Heian, always impulsive, was less fortunate. To make matters worse, Shzamias didn’t considered the roguish elf beautiful and promptly cursed him to the shape of an ugly and unimpressive goblin. Following this, Hilguen and Garet were summoned to prove that they’re among those that could be called braves. Each had to place one hand inside Kalikuja’s mouths – Shzamias’ throne was actually a unique fiendish crocodile. Both Hammers didn’t hesitate, although this action cost them their hands for Kalikuja quickly closed his three mouths. The aasimar resisted stoically, but Garet fell to ground yelling. Shzamias appreciated the paladin’s grace and regenerated his hand. Hilguen then healed Garet, now one-handed. Finally, the vizier questioned Dricia and Nogard, who claimed to be astute, with three questions concerning the planes, the dead gods and philosophy. After a short time talking to each other, the adventurers gave fitting answers.
With all “formalities” concluded, it was given consent for the Hammers (except Heian) to address Shzamias. Hilguen asked for the release of the party’s three allies: the Road Marshal Garamus, the Warbard Mellius and half-orc Karanuk. While these conversations took place, Garet and Heian scanned the court room and noted in the detailed ivory walls perfect pictures of Garamus, Mellius and Karanuk – the panel was a magic prison for the djinni’s inauspicious guests and servants.
After the paladin’s ceremonial and ornate request, Shzamias (a little bored) offered to release one friend for each court game that the Hammers won. 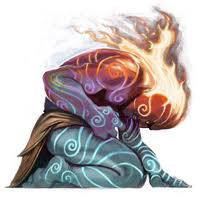 The first match was for the release of the Road Marshal. The Hammers were teleported to a floating platform, to face a giant clockwork golem. Whoever fell would be attacked by the vicious dao guards. The Hammer won quite easily by shutting down the golem – Heian (now in the small size of a goblin) managed to climb inside the big apparatus. Shzamias heartily applauded and order his apsaras to release Garamus from the ivory panel.
The next game was a chance to release the Warbard. A Hammer was chosen to run an asperi race around Shzamias’ flying island. Dricia, the maiden-priestess, was the one, for she was the party’s best rider. Shzamias’ champion was an air genasi called Breeze. The race was hard and Dricia was defeated because she failed to note the Breeze was actually an illusion and thus could never be surpassed. 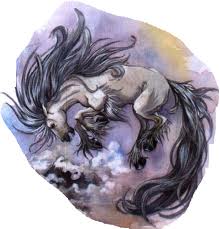 The last test was aimed to release the half-orc Kanaruk (of whom Hilguen was a friend). Shzamias decided to participate personally of the match. He polymorphed the half-orc to smoke and hid him among three lamps. He gave the Hammers one chance of finding in which lamp was their (now gaseous) friend, the only clue being these words “I, Shzamias, placed one dire predator in one lamp, a innocent victim in another and a loyal friend in a third. In which lamp is your half-orc hunter?”
Nogard asked for a chance to answer the riddle, because he came from cold Huan Ti, a nation whose inhabitants loved puzzles. After much consideration, Nogard provide the wrong answer by choosing one of three lamps. Laughing, Shzamias told the Hammers that the half-orc was in all three lamps, for Kanaruk was indeed a dire predator, an innocent victim and a loyal friend.
Desolated by the loss of two allies, the Hammers of the Dawn pondered their next move.
***Genasi in Chronicles of the Seventh Moon are the slaves and servants of the genies, created from humanoid stock through a harrowing dweomer. It is told that a genie can see and hear through the eyes and ears of those genasi created by him.

Posted by Tzimiscedracul at 2:06 AM