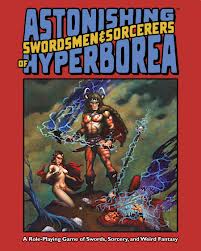 This augury is based on the PDF version of Astonishing Swordsmen & Sorcerers of Hyperborea (or ASSH). This is a typical “2nd Generation” retro-clone (i.e. it doesn’t try to emulate any D&D edition, been rather a mix of elements drawn from various sources, aimed at running classical sword & sorcery adventures).

The PDF version (for just $10) has 5 PDF files – a character sheet, the box lids, the Hyperborea map, the Referee’s Manual and the Player’s Manual. The layout is simple, with a classic-looking format (for Old School products at least). The B&W art, however, is beautiful and very flavorful. In fact, the art clearly is a very important part of ASSH (and of the setting of Hyperborea). 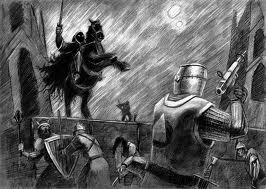 The Player’s Manual is actually made of 3 Volumes: Swordsmen & Sorcerers; Sorcery; and Adventure & Combat. ASSH use the traditional six ability scores, with tables of modifiers reminiscent of Greyhawk/BECMI – the novelty here is that ability tests use a d6 (a nice touch, maybe inspired by the rules in the LBBs). As a true sword & sorcery game, ASSH uses only human races – from Picts and Kimmerians, to Vikings, Ixians and Hyperboreans (there no mechanical distinction between them).

The next part of ASSH deserves it own paragraph: classes. First we have the 4 classic ones: Fighter, Cleric (a surprise for me), Thief and Magician. Each class has a Fighting Ability, and spellcasting classes also have a Casting Ability. Although Clerics get a tweaked description – better suited to sword & sorcery settings –, mechanical-wise they aren’t different from the traditional divine spellcaster that we all know (although Turn Undeads uses a d12). Both Cleric and Magician are a little disappointing in this regard (if you want a more “faithful” sword & sorcery spellcasting system, check Crypts & Things). However, if 4 classes aren’t all that interesting, the same can’t be said about the subclasses – these are just awesome. Basically, ASSH breaks down each original class in 4 subclasses. Fighters get Barbarian, Berserker, Cataphract, Paladin, Ranger and Warlock; Clerics get Druid, Monk, Priest and Shaman; Magicians gain Illusionist, Necromancer, Pyromancer and Witch; and Thieves gain Assassin, Bard, Legerdemainist and Scout. Each subclass keeps the original rules (no different spellcasting systems) but customizes them to fit the new archetype. They look balanced and very fun to play with – actually, the subclasses alone make this PDF a worthwhile acquisition. 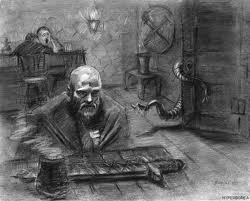 ASSH uses the Holmes Edition 5-tiered alignment system and a unified saving throw number (modified by ability score modifiers and classes). It also uses Second Skills and Weapon Skills system (inspired by AD&D 1st I guess). Where ASSH innovates is with armors – here they grant both a better defense (lowering your AC) and a small damage reduction.

The rules on Morale, Hirelings and Henchmen are clear and very well described. There’re also sections on a party’s Base of Operations, Adventure Preparations, Actions and Pacing. The basic Task Resolution system uses a d6.

Combat is relatively complex (looks like something taken from Chainmail, or maybe derived from Holmes, I’m not sure). It’s divided in 2 phases, each further divided in 4 steps: melee, missile, magic, movement. Initiative uses d6, with ties resolved by Dexterity. Tactics are henceforth important because things like movement establishing when your character attacks inside the combat sequence. ASSH also provides rules for unarmed combat, grapple, pummel and other maneuvers – and we’re not even into the advanced section yet. Yes, there is an advanced combat section, covering 22 new maneuvers (like Dodge, Indirect Fire and Parry & Block) and a critical hit system. I admit I was a little disappointed with the later – I was expecting tables, not just damage multiplier rules.

On saving throws, damage and special damage sections the only part that stood apart for me was the new Healing rule: you recover one rolled Hit Dice (plus Con modifier) for each night of rest (minimum 1). It’s a simple with very interesting rule that I’ll surely use on my D&D games.

ASSH grants XP by attendance, slaying/capturing monsters, treasure, clever use of ability, problem solving and achieving adventure/campaign goals. It also has detailed rules for aerial combat, waterborne expeditions, castles & strongholds and warfare & siege (YES!!!). The mass combat rules are abstract, but there’re guidelines for troop movements and provisions. I feel that there’s a sense of completeness on ASSH, which I sorely missed in Adventurer Conqueror King.

Now to the Referee’s Manual: this PDF is composed of Volumes IV (Bestiary), V (Treasure) and VI (Hyperborea). The Bestiary has a nice selection of classic and pulp monsters, including dinosaurs, bird-men, really lots of Lovecraftian goodness, creatures directly inspired by Smith’s tales (like the vhuurmis) – curiously there’re no dragons. We also get various encounter tables. Volume V’s highlight for me are the occasional pseudo-technological items (the kind of thing you expect to find on Atlantean ruins or Elder Things’ cities). 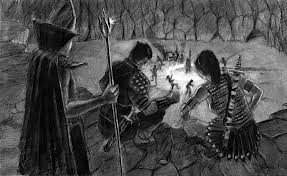 I told you that I bought ASSH only because of its subclasses. Well, if you think that that is not enough for (yet) another retro-clone then here is a bonus – the campaign setting of Hyperborea. This is a really great mash-up of Weird Tales fantasy plus D&D elements and classic mythological stuff. It’s also an amazing take on the entire idea of Smith’s Zothique Cycle – including the bizarre geography and dying sun. The references alone here put a smile on my face.

ASSH don’t hold punches with Hyperborea. The setting is richly described, with care and attention, though not richly detailed – and that’s an important distinction for an Old School product. There aren’t city maps, organization or NPCs lists, and neither lengthy descriptions of each town, city, land, island or mountain range. There’re excellent guidelines on the general geography of the land (including a very cool lunar calendar); a short timeline (with a cool reference to (The Coming of the White Worm); and basic details on famous locations, ruins and noteworthy city-sates. Among OSR products, this is definitely one of the best settings so far, on par with stuff like Isle of the Unknown and Carcosa (and not as polemical, which may be a selling point for some).

These are basically the main aspects of ASSH. Why was I interested on this product in first place? Well, the theme and illustrations are engaging. The fantasy/science fantasy aspect was another selling point for me. After buying the PDF, I can say that the production value of ASSH is great (I’m inclined to buy the physical box, which looks beautiful). The game also has a very distinct/unique flavor (the only other game that I can think of as good example would be Lamentations of the Flame Princess), besides the fact that it manages to achieve a remarkable feat (for me at least) – it feels like a RPG classic (I know that this is a hazy argument). Finally – but most important – although ASSH, like many other games, is based on the weird/pulp fictions of authors like Lovecraft and Howard, it drinks deep from Ashton Clark Smith. Actually, I dare say that ASSH is so far the best game for running adventures based on Smith’s Poseidonis and Zothique Cycles – it is that good! Now, I really need to find a place where I can buy that damn box… 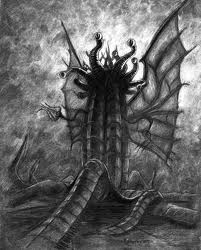 Posted by Tzimiscedracul at 11:23 AM