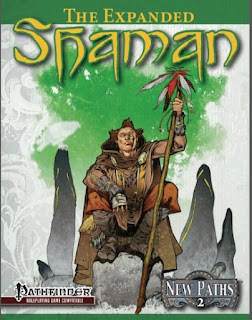 The second entry on Open Design’s New Path series is the Expanded Shaman. This new class for Pathfinder was introduced on Kobold Quarterly #21 as a new spontaneous divine spellcaster. You can say that the Shaman is to Druid as the Oracle is to the Cleric. Besides, the concept of a primitive spellcaster that communes with spirits is so universal that I always found weird that it hasn’t showed up before in a Paizo product.

Mechanically speaking, the Shaman mirrors the Druid, including using the same spell list (although limited by the Spells Known to each Shaman). Instead of an animal companion, Shamans gain an Animal Spirit Guide (with its own progression table). It gains the ability to commune with spirits (a.k.a. divinations), besides other neat tricks like the incorporeal subtype and fast healing – all at higher levels.

Like most Pathfinder classes, the Shaman has a plethora of special abilities that must be chosen, easily customizing each character. These abilities are described by the Totem Secret class feature and cover things like blood divination, speak with animals, spirit sight (including seeing in the astral and ethereal planes), summon spirits etc. Shamans also gain a limited amount of healing and can wild shape. Other iconic powers associated with the archetype are spirit dance (with booster the Shaman’s spells) and vision quest (treated here as astral projection). Curiously, vision quest isn’t a benchmark ability (it’s gained at 19th level) and the Shaman doesn’t gain a new trick at 20th level, besides the ability to use his spirit dance unlimited.

My augury? The class is really traditional, following a “by the number” rules structure and refereeing to spells well consolidated in Pathfinder/D&D 3.5 – and I must say that, in this case, I loved it! It’s amazingly easily to use, to integrate in any game and it doesn’t conflict with any cosmology (shamans usually come with a “Spirit World bonus plane”… something that not all Gamemaster are found of). Finally: it plays like other Core and Base Classes. In other words: it feels like something Paizo would have written. Do I need to say more?

Posted by Tzimiscedracul at 7:35 AM