Since reading Northlands, I want to play a sapient polar bear – the responsible is the Kingdom of the Bear mentioned in that book (which, oddly, doesn’t have intelligent bears). However, the true responsible for this post is Bailywolf’s thread on RPG.Net. The text below belongs to him, while the mechanics are my take on his original design (for ACKS). Hope you like. 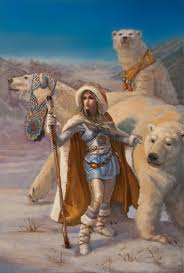 The Nordanbjörn (Sapient Northern Bears)
The Nordanbjörn are speaking bears, intelligent as men, but lacking the tool culture that comes easily to a people with such clever hands.  They are long limbed, sleek in Summer, heavy and shaggy in Winter.  They have jaws that can crush an elk’s skull, and claws longer than a man’s fingers.  They have rough dexterity with their forelimbs, and can rise to two legs if they must, but they’re not tool-users - at best, they can shrug on and cinch-up and a suit of dwarf-forged bear-barding.  They have the senses of a woodland beast, and are well adapted to the harsh climate of their native lands.
They are relatively few in number compared to humans, but control a broad forested territory to the North - the Nordanmarches.  The marches are a rugged and inhospitable terrain of mountains, icy rivers, dense ancient forests, and ice-broken rock.  The hub of the civilization is the Sky Hall - a vast and ancient ruin made in a pre-human age.  The females and young of the Nordanbjörn tend to cluster there, while the less sociable males wander the outer regions of the Nordanmarches, gathering only occasionally into bands for drinking and storytelling.
Nordanbjörn Racial Traits
+2 Strength, +2 Constitution, –2 Charisma
Large: Nordanbjörn are Large creatures and gain a –1 size penalty to their AC, a –1 size penalty on attack rolls, a +1 bonus to their Combat Maneuver Bonus and Combat Maneuver Defense, and a –4 size penalty on Stealth checks. Nordanbjörn occupy 10 ft., have a natural reach of 5 ft and – while walking on all four paws – calculate their encumbrance as quadrupeds.
Speed: Nordanbjörn have a base speed of 40 feet. Standing on two legs, their speed is 20 ft., they can’t run or charge.
Bear-senses: Nordanbjörn have low-light vision and scent.
Brute Strength: Nordanbjörn gain a +2 bonus on Strength checks made to break or bend objects.
Red in Tooth and Claw: Nordanbjörn have 3 natural weapons – a bite (1d6) and 2 claws (1d6) –, and a +2 racial bonus on Intimidate checks.
Tough Hide: Nordanbjörn have a +4 natural armor bonus.
Winterborn: Nordanbjörn are acclimated to cold weather and have a +4 racial bonus on Fortitude saves against severe and extreme cold weather. They also receive a +4 racial bonus on Survival (only in cold terrains), Stealth checks (only in snow) and in all Swim checks.
Sapient Bears: Nordanbjörn are sapient bears and work a little different than the usual humanoid races.
First, they aren’t tool users. While Nordanbjörn can stand on two, their upper limbs are limited to crude tasks, like carrying, pushing or smashing something. They can’t use weapons (unless custom made and grafted to their paws), armor (idem) or wield normal humanoid items.
Second, they are large and quadrupeds, which limits their movement, especially in tight spaces.
Third, Nordanbjörn have enormous appetites and must eat (in normal climes) a number of pounds of food equal to 3 + their STR modifier (minimum 3).
Finally, due to their limitation in weapons and armors, a Nordanbjörn can choose to replace the Weapon and Armor Proficiencies granted by their 1st level class for improved natural benefits:
Initial Idioms: Nordanbjörn speak their own language, Common and the tongue of normal bears.

Unique Nordanbjörn Options
These are just some suggestions for the Gamemaster with Nordanbjörn PCs in their party.
Monster Feats: A Nordanbjörn could (with the GM’s permission) buy monster feats like Awesome Blow, Improved Natural Attack, Improved Natural Armor and Multiattack.
Tool-User: A Nordanbjörn with Intelligence and Dexterity 13+ can buy this feat to use weapons or tools in general. However, these items must be sized for a Large humanoid user and the Nordanbjörn suffers a -2 penalty to all actions using such items (including attacks). Actions that require delicate manipulation (like lock picking) suffer a -4 penalty. This is a racial feat.
Powerful Bulk: At 4th level, a Nordanbjörn with Constitution 13+ can forego his 2nd Ability Score Increase to be considered of once size larger for the purpose of Combat Maneuvers while standing up. At 16th level, he can forego his 4th Ability Score Increase to gain the following modifications: Natural Armor +2, Dex -2 and improve the damage of his natural weapons by one step. At 20th level, he can forego his 5th Ability Score Increase to be considered of Huge size for all gaming effects.
Commentary: Powerful Bulk allows a Nordanbjörn to grow in size and power without stripping him of feats. By 20th level he gains basically 2 benefits – the reach of a Huge creature and, if he stands up, he can face use Combat Maneuvers as Gargantuan creature (like wrestling an old dragon, a task worth of a legendary northern bear).

Posted by Tzimiscedracul at 8:12 AM