The Chronicles of the Seventh Moon - Session 8 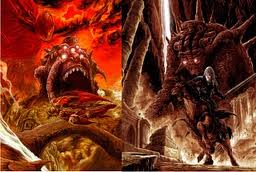 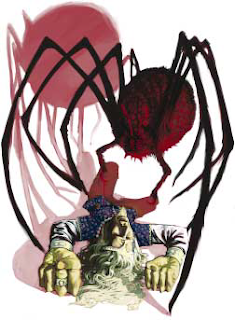 Finding another path through the caves the Hammers crossed the mountain, only to reach a dead-end over a cliff. Dispirited, the group went back. Returning was even harder. While climbing down the mountain slope the party was hit in the open by an ash rain and had to fight through fire elementals. To make things worse, Garet’s backpack caught fire, detonating the technomagic grenades within. While recovering from the explosion, an avalanche started – caused not by the grenades but by a weird beast, half-crab, half-spider, with rock skin and a sole eye. The creature could control loose rocks around it and change rock to mud. The group survived thanks to celestial fire birds summoned from the Twin Suns by Drícia; Hilguen later managed to enter the brawl with his Divine Spark, evening the odds.
Night has already fallen, but the Hammers – battered and without resources – decided to push on to the safe walls of the lighthouse. 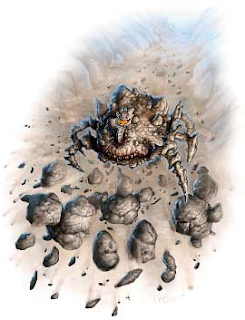 Day 6, Solar Month, 757 years since the Fall of the Gods, early summer
The Hammers were greeted at the Lower Gate by the priestess-monk Ylira, from the Avengers of the Gôteintor. She told them that the Road Marshal, Garamus the Hawk, had recovered from his wounds. She also informed them that the Knights of the Mug were now the only adventurer party outside the keep. After climbing to the upper levels, the Hammers meet the leader of the Avengers – Amaris D’Eris. The cavalier has returned from the upper Road of the Mountain with strange tales – there was a giant wall of magic ice covering the road some miles above. At this moment the lighthouse’s bells alerted the defenders that the horde has returned. Going to the walls, the Hammers saw thousand of torches appearing from nowhere in the peaks above the Eye. The goblinoid army was still far, maybe behind the mysterious ice wall mentioned by Aramis, but its numbers were staggering – probably four or five times bigger than the army that left Baer’s Tower.

Posted by Tzimiscedracul at 12:00 AM