Allow me to rant a little. See, I’m a great fan of adventures that revolve around hard choices and tough decisions that always cost something for the heroes. For me those are things like conflicting loyalties, dubious allies, “the enemy of my enemy is my friend”, characters with second (and secret) motivations… stuff like that. The components of a good drama.
The problem?
I’m also a great D&D and Pathfinder fan, games that many believe to be the antithesis to most of the aspects listed above. Some blame the alignment system, others certain divination spells. And there those that point to the origins of the game as a proof of its incompatibility with such intrigue-rich scenarios.
Well, I don’t buy it.
First, you just have to see beyond Good x Evil as a source for conflicts. Even without a full-fledged setting, a traditional d20 game (like Pathfinder) gives you – right at the Core Rulebook – a ton of factions and divergent groups, all ready to start plotting and performing some skullduggery. The Good/Evil axis is just one of many: we have races, religions and – always forgotten – classes! Please note that I didn’t even mentioned the old Law x Chaos cliché. There are also d20 settings full of intrigue and some of the dramatic elements mentioned above. 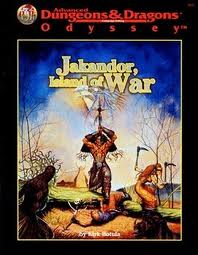 As my first example, take a look at classic computer games like Baldur’s Gate II and Torment, where the main hero is always forced to deal (or even ally) with the “other side”. We’re not talking here of corruption or any “temptation of the Dark Side”, but of necessary alliances and – again – tough choices with dramatic consequences. Some may even remember the AD&D 2nd product trilogy Jakandor (of the Odyssey line), where we had two rival cultures totally divorced from the Good/Evil axis (and both accessible to player characters). The classic Gazetteer series for the Known World setting (a.k.a. Mystara) for OD&D also presented plenty of realms and cultures with opposite values, most without even touching on the alignment subject.
In the last years, two campaign settings caught my attention by creating some truly unique and intelligent sources for conflict and intrigue adventures. 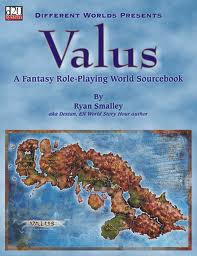 The setting of Valus, released by the small press Different Worlds Publications, introduces us to a world born of divine strife and disdain, where a pantheon of petty siblings squabbles constantly for power, without any sympathy or care for their mortal worshippers. The rich mythology of the setting, along with a more realistic and medieval world, generates a lot of situations where alignment lines are crossed due to nationality, religion and race. Of course, Valus is a gritty setting, with mature themes like racism and sex are common.
Let’s take a look at a more “traditional” setting. 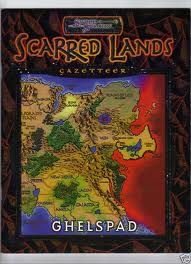 Posted by Tzimiscedracul at 11:42 AM